Fairfax, VA -- (SBWIRE) -- 08/31/2016 -- Leilani Phillips author and founder of Feed 'Em Fish Publishing, has officially launched a Kickstarter campaign for garnering widespread support and financial backing for publishing her book 'Rosette the Grey Seal: A Seal Rescue Story'. The book aims to illustrate the enchanting tale of a seal rescue as viewed through the eyes of the seal, help raise awareness of the rescue process and raise proceeds for the Seal Rescue in Courtown, Ireland.

Based on a true story, with hand painted, colorful water color illustrations, 'Rosette the Grey Seal' is a book about the author's recent trip to Ireland and her volunteer work at the Seal Rescue in Courtown, Ireland. Through the story, readers will learn about the great people who work at the Seal Rescue, the lives of the seals and what is entailed in the rescue process.

The author hopes to educate children about seals and inspire those who read the book to develop a life-long interest in helping animals and others less fortunate than themselves. "Children have a natural interest and love of animals", said author and Kickstarter project creator Leilani Phillips. "I want to give them the gratification that comes from knowing the purchase of this story will be helping to provide food and rescue to many more seals."

Currently, the written story is finished and the illustrations are nearing completion. When complete, the book will be made available in at least three formats including paperback, digital and pdf. If successful, Feed 'Em Fish Publishing plans two additional stories the series.

About Kickstarter
Kickstarter is a funding platform for creative projects. Everything from films, games, and music to art, design, and technology. 'Backers' who support a project on Kickstarter get an inside look at the creative process, and help that project come to life. All Backers of the Rosette the Grey Seal Kickstarter campaign will receive a first edition copy of the book signed by the author for a pledge of $29 or more.

The campaign seeks to raise $5000 or more in order to finance the expenses involved in printing and marketing the book, as well as for the purchase of an ISBN (internationally recognized number required to identify the book). A portion of the proceeds will go to the Seal Rescue. "The rescue is a wonderful operation and they need money for fish to keep feeding the seals," said Phillips. "I'm really not in the financial position to be able to make a meaningful donation, so … I had the idea to write this book and donate a portion of the proceeds back to the rescue." The Kickstarter campaign is officially open until September 17, 2016.

For more information about the Kickstarter campaign, visit: http://kck.st/2bl5kbW 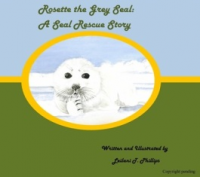