Josh Donellan describes his children’s fantasy novel, Zeb and the Great Ruckus, as “like Orwell’s 1984 for kids, but with more magic, music and explosions. It’s a story made from pieces of all the dreams you had when you were asleep, but then forgot when you woke up.”

Brisbane, Australia -- (SBWIRE) -- 09/18/2012 -- Akin to the Narnia Chronicles and Lord of the Rings, Zeb and the Great Ruckus isn’t just a book for kids. Satirically prophetic, it is a subversive protest at authority figures undermining the production of original thought. Originally conceived as a warning, Zeb’s central antagonist the Czar is eerily representative of Campbell Newman’s anti-art government.

The book features young Zeb and his companions as they attempt to return the long forgotten magic of art and music to their culturally stripped land.

“Newman’s first act in power was to slash the Premier’s Literary Awards–as though that was the single most pressing issue for Queensland. He elected to do this during the National Year of Reading. Did no one send him a memo on this? Perhaps they did, and he just didn’t read it.”

Although an incisive insight into draconian rule, the novel is by no means grim. Zeb plays out its allegorical message over a wild and fantastic landscape. It is crafted with eccentric humour, populated by strange creatures such as cave dwelling ruttersnarls and bewilderbeasts, and is sure to enrapture audiences of all ages. The story is complimented by the whimsical illustrations of award-winning artist Kathleen Jennings.

Zeb and the Great Ruckus is a celebration of art and music and a critique of the forces that try to oppress them.

The book is available in paperback and eBook from Odyssey Books, iTunes, Amazon and all good book retailers.

About Josh Donellan – Brisbane
In addition to being an author, Josh is also a teacher, musician, music journalist, radio announcer and multiple award-winning slam poet. Although based in Brisbane, Josh is an avid traveller who has journeyed extensively through South-East Asia, India, Nepal, South America, the USA and Europe. He was almost devoured by a tiger in the jungles of Malaysia, nearly died of a lung collapse in the Nepalese Himalayas, fended off a pack of rabid dogs with a guitar in the mountains of India, and was harassed by a half-naked man while standing next to Oscar Wilde's grave in Paris.

Zeb and the Great Ruckus is his second novel. His debut, A Beginner’s Guide to Dying in India, (winner of the IP picks best fiction award 2009), combined elements of humour, travel fiction, adventure and philosophy. Josh has an unnatural fondness for scrabble and an irrational dislike of frangipanis. 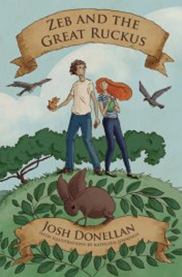