From Jennifer Fales, ‘Sleight of Hand: Shadow Games’ is the hotly-anticipated sequel to the author’s celebrated novella, ‘Shadows and Fire’. Readers have been hooked from the beginning on Fales’ boundless imagination, and she delivers again with this tale of a future where humans and human/animal hybrids exist within separate societies, against the backdrop of a violent and perilous world. Sexy, unique and already earning 5 Stars on Amazon, ‘Sleight of Hand: Shadow Games’ is set to put Fales firmly on the map as the fantasy writer to watch.

Corona, CA -- (SBWIRE) -- 02/10/2014 -- It isn’t every author who can claim to have won awards during their first forays into the publishing world, but Jennifer Fales is one of them.

Fales’ first book in her dystopian series, ‘Shadows and Fire’, won the ForeWord Reviews Book of the Year Award, and her second novel, ‘The Seraph Contingency’ has won awards from Reader’s Favorite International and Feathered Quill Book Reviews. All par for the course for Fales, who has come roaring out of the starting gate and wowed fantasy readers from the beginning.

In her latest page-turner, ‘Sleight of Hand: Shadow Games’, Fales continues the tradition she began with her novella, ‘Shadows and Fire’, offering her fans a complex future world, dazzling characters and Fales’ signature prose – immersive, imaginative and provocative.

Tracing the path of heroine, Lilith, Fales’ narrative is a thrilling mix of bombs, blackmail, a parallel future, one psychopathic twin, an amusingly flatulent canine and a woman whose genetics bridge the gap between human and human/animal hybrid. Lilith is forced to come to terms with her unpredictable powers, and she is the beating heart of Fales’ story.

“Readers really love her, which is wonderful,” says Fales. “She’s resilient, intelligent and yet she has flaws too – she’s not a cookie-cutter heroine. I’m not fascinated by perfection – I want to get to the core of a character and pull them apart, force them to face their demons. Lilith is complicated, and I think that’s what readers love the most – someone they can relate to, and root for – and above all, someone whose mind they’d like to climb inside.”

In the sequel to the award-winning novella Shadows and Fire, the tale of a future where humans and human/animal hybrids known as Supernaturals exist in separate societies continues. Adult twins Lilith and Laydon, the product of a violent act that bridges both worlds, each struggle to find their own identity, one leading to darkness and one into light, as they develop their powers deep in the shadowy world of the domes.

Meanwhile the threat of war looms on the horizon. Lilith and Augustin, the retired warrior priest she considers a father, find the house they have aligned themselves with faces a critical threat to its voice and power. Lilith, the Dragon House, and its allies are set on a dangerous race against the clock to unravel the truth behind jealousy, lies and blackmail before it's too late.

As the author points out, the last thing she wants to do is to bore the reader.

“My aim is to entertain,” says Fales. “I want people to become so involved with the book that they can’t put it down. That feeling of needing to keep reading is addictive and I’m always thrilled when fans tell me that they felt as if they became part of the world and that reality fell away. There’s no greater compliment that an author can receive.”

In the short time since its release, ‘Sleight of Hand: Shadow Games’ has earned glowing reviews from readers and publications.

“Fantasy readers have a great deal to be excited about in this seamless and well-thought-out world,” from ForeWord Reviews/Clarion Review.

R. Coker was equally impressed, writing: “"Sleight of Hand: Shadow Games" is the kind of slick, polished and fantastically imaginative novel that removes you from the oh-so-normal real world and creates a compelling world of dark and light, human and Other, and the battle between the two that threatens them all.”

Calling the book, ‘perfect’, Jane Lavuire wrote: “It didn't take me long to find myself hooked right into Sleight of Hand, and this lasted all the way from the beginning until the end. The plot is beyond unique and I think that each character fits in perfectly in their own special way. The dialogue is great and it's one of the few books where the characters almost seem life like due to the raw 'three-dimensional' aspect of them.”

About Jennifer Fales
Jennifer Fales was born in Jacksonville, Florida, and lived in Cocoa Beach and Melbourne during her high school and college years. She moved to Southern California in 2004. Jennifer has worn many professional hats over the decades in the clothing and automotive industries as well as in the financial world. 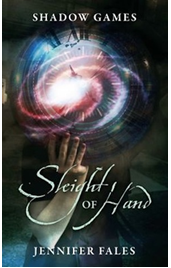