Toronto, Canada -- (SBWIRE) -- 07/17/2013 -- Author Roger Croft impressed audiences with the release of The Wayward Spy, his first espionage thriller in 2010. Then, his style and tone were compared to the spy novels of acclaimed writers John Le Carre, Len Deighton and Graham Greene. The author recently announced his newest work, Operation Saladin, The Wayward Spy’s sequel, in which protagonist Michael Vaux, the former MI6 agent, returns. The latest novel has already garnered many positive early reviews.

In Operation Saladin, Vaux is again asked to serve queen and country after a stint in Syria and Egypt as a newsman. Following the death of Syria’s President, Vaux’s friend Ahmed Kadri, Syria’s chief armaments buyer, is arrested. Syria’s security agency, the GSD, demands that Vaux return to Damascus from Cairo. Warned by his romantic interest Alena Hussein, GSD’s chief of station in Cairo, that he faces questions about his friendship with Kadri and his links with Britain’s Secret Intelligence Service, Vaux fears for his safety and opts to leave. Enter MI6. His former employers offer to forgive all past misdeeds should he accept a special assignment: to play the principal role in Operation Saladin, a plot to help a Syrian nuclear scientist defect to the UK with his top-secret dossier on Syria’s nuclear program and its stockpiles of chemical weapons.

What ensues is a “fast-paced, fascinating sequel to The Wayward Spy,” says one reviewer on Croft’s website. “Author Roger Croft has created a series of suspenseful novels that will leave readers mesmerized by the story line, the characters and the action. Operation Saladin could be a blockbuster movie hit on any big screen across the world.”

Another reviewer writes, “The characters are well-drawn and as usual, Croft’s humor and skepticism about MI6?s core competence and the foibles and vanities of bureaucrats in general make for a pleasurable read. In particular, the climax is as unpredictable as it was in the first of what one hopes will be a Michael Vaux series of post-Cold War espionage novels.”

About Roger Croft
Born in Bushey, Hertfordshire, England, Roger Croft’s roots are in financial journalism. His first foray into writing was with London’s Daily Mail where he worked under legendary editor Patrick Sergeant. Later, he wrote for The Economist where his boss, Deputy Editor Roland Bird, was later revealed as an undercover MI5 operative; and the Sunday Telegraph with Nigel Lawson, who became the U.K.’S Chancellor of the Exchequer. In the mid-60s, living in Egypt, Croft wrote editorials for the Egyptian Gazette and freelanced as a Middle East correspondent. Once back in North America, he helped launch the refurbished Financial Times of Canada and then joined its rival, the Financial Post. He also co-founded Investor’s Digest of Canada. In the 70s and 80s, Croft served as Ottawa correspondent for The Toronto Star and in 1978 was nominated for a National Newspaper Award for a series of feature articles on the history of inflation. Since retiring from journalism, Croft has toured the world for novel ideas. For more information on Croft’s novels, visit: http://www.rogercroft.com 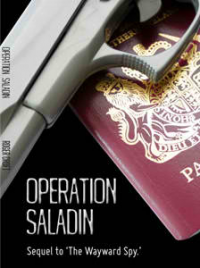