So, You Think You Can Dance With the Stars?

“Through the Heart of Tango” , A Documentary by Joey Travolta’s Inclusion Films Pairs Individuals With and Without Autism

Los Angeles, CA -- (SBWIRE) -- 03/13/2012 -- When Joey Travolta was approached to produce a documentary about the connection that can be formed between persons with autism who are matched with dance partners without, he had no reservations.

“The passion I see every day with our students at Inclusion Films as they are introduced to the media arts, in our case filmmaking, is palpable,” said Mr. Travolta. “What we’ve already seen from the Through the Heart of Tango audition footage proves that dance inspires a similar kind of passion.”

Through the Heart of Tango is the launch vehicle for the “Match A Friend” program, founded by Elena Alexandra and Lana David of Dance Into Unity. “Through the Heart of Tango is designed to highlight the genuine connections can be formed, teaching diverse youth what it means to connect with individuals who have autism and other developmental disabilities,” said Ms. Alexandra

“The purpose of the film is to show how a person with autism helps us not only to see the world differently but change it for the better. Someone who is seemingly disconnected actually helps us connect with ourselves, learning a new language beyond words,” added Ms. David.

Westchester native Haley O’Loughlin attended Dance Into Unity’s auditions at the urging of her own mother Lynda, the person she describes as her greatest inspiration. As the cameras rolled, it became clear that Haley was just the kind of “lovely spirit” the creators of this project had in mind. “I am so happy and excited that I get to be a part of this great project,” said the 16-year old. “The audition was so much fun and everyone was so nice I can’t wait to get started.”

Haley will be joined by her childhood friend, Connor Coady of Playa del Rey, also chosen for the documentary. “I hope this film shows people the positive side of autism,” said Connor. “That unlike what some of the media wants to portray, autistics are not damaged, just different.” The fact that among the many who auditioned, both made the final cut made this even more special for their families.

Broadway and television stars Miriam Larici and Leonardo Barrionuevo will be sharing the secrets of the tango as the participants listen to music, learn steps and study videos. The film will follow each pair as the anticipation builds toward the finale. Each set of peers will make their debut at a gala event in their honor on April 21st and 22nd at Beyond the Stars Palace in Glendale.

About Dance Into Unity
Dance Into Unity, Inc. (DIU) was founded in 2006 to raise autism awareness through the arts. From 2006-2008 DIU produced several Broadway-cast dance productions to raise autism awareness, attracting over 6,000 people. While looking for a solution to autism DIU founders came to the conclusion that autism affects us all. Inspired by this discovery they wrote the fairytale “Dance Into Unity through the Heart of Tango” (the basis for their dance productions) where they explored the concept of unity through universally familiar characters including Light, Truth, Snake, Disconnect, Dreamer and the Tango Dancers all on a quest to solve the “Puzzle of the Tall Tower”. The book is to be published this year. For more information about DIU and its founders please visit www.danceintounity.org. or call 310-393-3457.

About Inclusion Films
In addition to his early years as a performer and actor, Joey Travolta worked as a special education teacher. Travolta founded Inclusion Films in 2006 after producing the highly acclaimed documentary, “Normal People Scare Me”, directed by an autistic teen. Through his unique professional experiences, this revolutionary film school trains adults with special needs such as autism, Down syndrome and cerebral palsy. A vocational program for basic film production skills, students attend the film school Monday through Friday and are involved in all facets and specialties. Headquartered in Burbank, California Inclusion Films hosts a second location in Bakersfield, California and summer programs throughout the country. For more information, visit their website: www.inclusionfilms.com or call 818-848-3708. 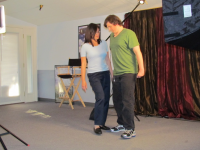 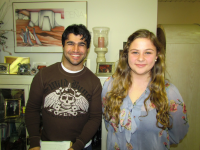 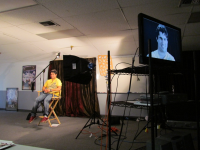