San Diego, CA -- (SBWIRE) -- 10/23/2012 -- Edward Meara, an attorney with over two decades of experience, recently joined the law office of Aminpour & Associates in San Diego, Calif. Meara, who is a member of the New York and California Bar Associations, will work as Aminpour’s senior litigation attorney.

According to an article on the firm’s website Your Law Office, Meara is now part of a group of attorneys that has over 50 years of combined experienced in the field of auto accidents. Since it first opened for business in 1996, the knowledgeable team has helped thousands of injured clients.

Because of Meara’s vast experience working as defense counsel on thousands of personal injury cases—for example, he worked for 10 years as in house counsel for a major insurance company—he truly understands the ins and outs of each case. As an auto accident lawyer, Meara is passionate about making sure his clients will receive the maximum amount of compensation.

Before beginning his distinguished career as an attorney, Meara served as a Sergeant in the United States Army as an Atomic Demolition Munitions Specialist in Europe. There, he became conversant in German, Spanish, Russian and French. He is also a Distinguished Graduate of the Third Infantry Division NCO Academy, Rock of the Marne.

As his bio noted, Meara first began his legal career clerking for the Honorable J. Daniel Mahoney on the Second Circuit Court of Appeals in New York City.

“While still working with Coudert Brothers in Los Angeles, he also completed the Trial Attorney Project and prosecuted cases with the City Attorney's Office.”

With his extensive legal experience and commitment to his clients, Meara is already fitting in well in his new role at Aminpour & Associates. He shares his co-workers’ commitment to providing clients with dedicated and experienced legal representation.

About Aminpour & Associates
Aminpour & Associates, located in San Diego, is one of the leading personal injury firms in California. Since 1996, the firm has helped thousands of accident / injury victims and their families recover compensation for their injuries and loss. For more information, please visit http://www.yourlawoffice.com 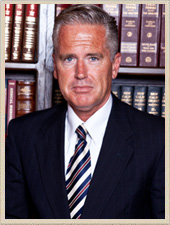