When terrorist attacks inadvertently lead to World War III, can one group of savvy survivalists endure all that is thrown their way? In L. Michael Rusin’s debut novel, their compelling account is told through a bold and gripping adventure. Offering a thought-provoking read, ‘Avalon: The Retreat’ is resonating with readers around the world.

Chesapeake, VA -- (SBWIRE) -- 04/04/2013 -- As global conflict increases, literature’s Survivalism genre is experiencing something of a renaissance. Fusing fantasy and fiction with the idea that humans may one day experience sudden societal collapse, many are embracing the literary movement and all it has to offer.

‘Avalon: The Retreat’, by L. Michael Rusin, calls on the author’s own extensive survivalism experience to fuse fact and fiction into a story that could one become a harsh reality.

Mike heard the sirens go off and knew it was time to leave; he hoped the others had already gotten the secret message and were on their way as well. He felt the adrenalin rush through his body as he hurried to meet them and set in motion what they had planned for the last six years. They all hoped this day would never come, but he was glad now that they were prepared to meet it head-on. As he rode through the streets on his motorcycle, he knew that he could never return to this place.

Chaos would reign quickly and, little known to him, what was left of civilization was already crumbling to its lowest form of humanity. Radio announcements warned everyone to stay inside their homes, but that wasn’t going to happen for Mike and the others.

As he rode quickly toward the first cache, the words from the radio played over and over in his head, ”It's my sad duty to inform you that a nuclear device was detonated in Atlanta, Georgia a few moments ago. Casualties are running high and details are sketchy. Stay tuned for further developments.”

Mike knew that this was only the beginning of events in a world gone mad.

As a practicing Survivalist since 1966, Rusin’s release fulfils a life-long dream of publishing a book based around the movement.

“While the story itself is fictional, it is laced with actual techniques, concepts and skills that many survivalists embrace on a daily basis. Millions of us are actively preparing for emergencies and our expertise may be needed sooner than we think,” says Rusin, who recently achieved over 2700 downloads during a recent Kindle promotion day.

He continues, “That is why this book is so unique. Though placed in somewhat of an ideal setting, it’s not an out-of-this-world fantasy story, but the depiction of a disaster that millions of real people around the world are already preparing for, as we speak. Learning how to be self-sufficient could make the different between life and death when the ‘time’ finally arrives.”

Rusin’s in-depth knowledge of his subject shines through the narrative in abundance. This unique medley of fact and fiction has spawned a consistent string of rave reviews.

“There is so much thoughtful detail put into every situation that the author describes; you can pretty much picture this book as an amazing movie or TV Series!” says Jennifer Latigue, who reviewed the book on Amazon.

Jeri M. Walsh was equally as impressed, saying, “Good book for doomsday preppers, would give them a lot of tips. I just read it for the story itself and it was done well with lots of excitement.”

With so much success on his hands, Rusin has recently announced that two follow-up books are in the works. With the next release planned before the end of the year, 2013 is set to fulfil many more dreams for the seventy one year-old author.

“There’s no such thing as retiring in the world of survivalism. I plan to keep preparing long into the future, so expect many more exciting books. Hopefully they’ll inspire others to consider their own preparedness for inevitable disaster, too,” he concludes.

More information can be found on the publisher’s website: http://www.kamelpress.com/

About the Author: L. Michael Rusin
L. Michael Rusin is masterful storyteller who incorporates real survivalist skills to captivate his readers. He uses the pseudonym L. Michael Rusin to honor his Father, who died in 1953 while serving as Chief in the U.S. Navy.

He has been a practicing Survivalist since 1966 and has conducted numerous survival training sessions as a retreat planner for more than thirty years. Rusin remains active in preparing for those unspeakable tragedies that we may all face in the not-too-distant future. 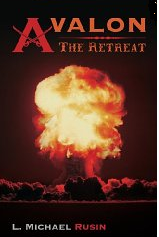