Game Gorilla is a revolutionary new way to trade games with other gamers across the United States.

Dunedin, FL -- (SBWIRE) -- 04/30/2014 -- Most of the gamers have on occasion borrowed a game or two from their friends - games that they were not only excited to play, but equally as excited to not have to pay for the experience. Most of the time, that same friend might have wanted to borrow a game from them - a mutually beneficial endeavor to say the least.

Now imagine having the ability to trade games with people across the entire country, not just with the close circle of friends. At Game Gorilla, George and Aaron Courtney are offering just that. Their patented algorithm matches up users from across the country and allows them to trade their games with each other in the safest environment possible. Consequently, one’s circle of friends just got much bigger. And here's the good part, all users deal with Game Gorilla directly, and they guarantee a successful trade from the beginning to the end of the process.

The more money George and Aaron raise for this project, the better Game Gorilla will be at launch. With these contributions, they aim to build and improve Game Gorilla's overall design and functionality for the best possible user experience. In addition, if they meet the goal of $50,000 USD, they will be able to add an even bigger database that will not only include PS4 and Xbox One games, but Xbox 360, PS3, and Wii U games as well. 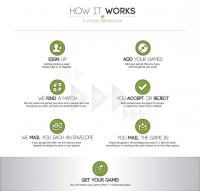