Taking the world of fantasy fiction to the next level, author Tegon Maus is delighted announce the latest addition to the Tucker Littlefield Chronicles series.

‘The Gift’ is poised to take the fantasy fiction genre to the next level. Its plot is compelling.

“The Gift – The Tucker Littlefield Chronicles is told from the perspective of Tucker Littlefield, who, before being threatened into an affair which does not involve him, is a fairly ordinary man. But he has a knack and reputation for being self-interested. It is one such act of “selfish heroism,” which traps him in what seems an unfair situation. In attempt to win the king’s gratitude, Littlefield pulls Elizabeth, the king’s seven-year-old niece, into safety during an attack by the Jonda. Even so, the Jonda manage to escape with child.

It is Eloise, Elizabeth’s fierce but emotional nanny, who threatens Littlefield into bringing the child back to safety. Although she knows the man only by reputation, she is desperate and believes he will be able to do the job. Along with Enon – an insightful Jonda who struggles with speaking common – two other Jonda, Bowen and Spath, and Enon’s dog, Littlefield sets out to rescue the girl. But it is no easy road which twists ahead. Littlefield and his companions face not only the hardships of their differences, but the power of outside forces working against them.”

As Maus explains, the road to literary success was no easy ride.

“It has taken me twelve years and two hundred and eleven publisher rejections to finally take the Tucker Littlefield Chronicles to press. I’m delighted to finally call myself a published author and can’t wait to share my work with the world,” he says.

‘The Gift’, published by Netherworld Books, is available from Amazon and Barnes & Noble.

About the author, in his own words:
My wife of forty three years and I live in Cherry Valley, a little town of 8,200 in Southern California. In that time, I've built a successful remodelling /contracting business. But that's just my day job... everyone that writes... everyone who tells you how to write, all say the same thing.... write about what you know... and what I know... is me.

Well, at least the me I see when I write... an... alter ego of myself that gets frequently wedged between a rock and a hard place but manages to work things out at the last minute after all. Like most of us when pushed into a corner it only brings out the best in us and we become the unstoppable force of a reluctant hero... at least on paper, making the day to day a little more tolerable. If I have a signature style for creating a character then this is it. 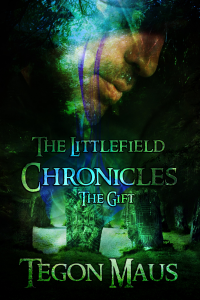