Canton, OH -- (SBWIRE) -- 08/28/2012 -- BADBOY Blasters, an online air compressor and sand blaster retail store, was recently heavily featured on the History Channel program Modern Marvels. BADBOY Blasters guested on the show to showcase a few pieces of equipment such as their Premiere Series, their Baddest series, and their Beast series. The episode, titled ‘Under Pressure,’ specifically deals with air pressure related machinery and technology, of which BADBOY Blasters are heavily learned in.

Modern Marvels is a documentary television series that premiered in 1993 on the History Channel. The episode focuses on the use of technology in a number of different professions and how the progression of technology has affected us as humans. The majority of most episodes deal with the history of each piece of technology, but they often visit utilizers of the technology across the nation to get a first-hand view at how the technology is used.

BADBOY Blasters offer an enormous range of different blasters such as the Maximum series, The Soda Pro Blaster series, the Soda Cabinet series, the Tornado series, and the Warrior series. They also offer custom built sandblasters as well as accessories and replacement parts. For more information, visit their website at http://www.badboyblasters.com. To see them in Modern Marvels, visit the History channel website at http://www.history.com/shows/modern-marvels/videos/playlists/full-episodes#modern-marvels-under-pressure.

About BADBOY Blasters
BADBOY Blasters is an independent family-owned company, built from the ground up specifically to cater to the air pressure related machinery like sand blasters and soda blasters. Their small online business platform gives them an edge over larger companies and they are committed to providing customers with only the best products. 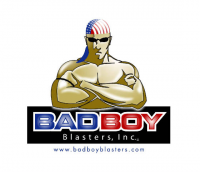