Having already become a smashing African American best-seller on Amazon, David Weaver’s latest novel traces the story of the Bawss bloodline and reveals stark truths about love, loyalty and courage.

Buena Vista, GA -- (SBWIRE) -- 09/28/2012 -- The War on Drugs has been fiercely battled by the United States Government for generations, even though its origins are mostly unknown. However, a new novel by David Weaver provides a hypothetical explanation that fuses real-life history with compelling facets of fiction.

When the first slaves were brought into America, they were weaker, more complacent; and had semi-tolerable attitudes. But when the slave-masters sought to get more production out of their plantations, they decided that they needed to kidnap a stronger group of slaves. When they kidnap the Bawss tribe, however; they realized that their bloodline was too dominant and too powerful.

This story tells the lineage of strong, courageous and skilled individuals by the family name of Bawss. The novel tracks their heritage through multiple generations all the way back to their African roots. Section 2 contains an effortless parallelism to the introduction and subsequent epidemic of Crack Cocaine brilliantly. The protagonist, Jakob Bawss is the first person with crack cocaine in his possession- or so he thought.

The play on the involvement of the Federal Government certainly mimics thoughts widely shared among the African American community for quite some time. The representation of characters in the novel gives the reader a fairly accurate glimpse into the lives, minds, and emotions of those who abuse drugs as well as those who supply them.

As the author explains, while primarily based on fiction, his book highlights the equally time-told journey of minority struggle.

He continues, “It teaches the downfalls of power, consequences of learning the wrong type of power, and hypothetically shows how the introduction of crack cocaine could have gone down back in the 60s.”

Since its release, the book has garnered over sixty five reviews; many of them awarding five-stars.

“BAWSS was a page Turner I couldn't put it down read it in a matter of hours,” said one reader, reviewing the book on Amazon.

Another reader, Thamp, was equally as impressed.

“This book gave me a vivid picture of how it may have been to be to feel taken from your HOME and made to be in a place that was truly not meant to be happy in. We here the stories of slavery and how it may have been, but David Weaver is brilliant in how he weaved the times together through the Bawss Bloodline. I have read it twice, shared it with a co-worker and bought it as a gift for another. I love David Weaver!”

Ultimately a book about love, courage and loyalty – the novel offers a modern-day perspective on an age-old challenge.

Bawss, published by Amazon Digital Services, is available from Amazon.com.

His progress can also be followed on Twitter: http://www.twitter.com/bankrollsquad

About David Weaver
David Weaver's love of words and literary expression culminates from a wide array of resources; dating back to high school. He won multiple writing contests, and ended up writing for the newspaper for the city that he lived in at the age of 19 years old. He regularly wrote front page articles; he was building a fan base even back then.

He went to federal prison at the age of 24, and came out refreshed; now at the age of 28 years old. His writing contains tidbits of poetry, lots of similies and unheard of before metaphors that will leave your jaws dropped in awe.

He writes his books crisp and smooth; idolizing the greats such as Sidney Sheldon, Eric Jerome Dickey, Omar Ty'Ree, K'wan, Sistah Souljah, and Donald Goines. You will enjoy the scene shifting wordplay of author David Weaver. 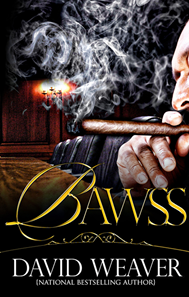