San Fransisco, CA -- (SBWIRE) -- 08/10/2012 -- Despite RIM’s struggles over the last few years, many people continue to enjoy one of the Blackberry’s most popular apps – Blackberry Messenger (BBM). BBM is an easy way for Blackberry owners to connect with one another over instant messaging. Users can instantly send videos, pictures, and text messages to their contacts free of charge.

Unfortunately, iPhone users do not have access to BBM. BBM comes pre-installed on every Blackberry device, and users are assigned a PIN that is unique to each smartphone. As a result, Apple’s app partners have found it difficult to replicate the BBM experience on an iPhone.

However, one website has figured out a way to run BBM on iPhones. BBMforiPhones.net recently announced the release of BBM for iPhone, a special app that brings the popular instant-messaging service to the iPhone’s iOS operating system.

A spokesperson for BBMforiPhones.net explained how the BBM app for iPhones works:

“Our team of programmers has worked hard to create a BBM app for iPhones. Our app will instantly be familiar to anyone who has used BBM on their Blackberries. It features the same interface, features, and usability as RIM’s powerful app, and we already have thousands of users who have signed up for the service.”

BBM features a number of advantages that other messaging services do not have. Many users appreciate BBM because it’s incredibly secure. Messages are encrypted, which means that a phone company, government agency, and even RIM itself is not able to read messages sent between its users. BBM was also the first chat system that allowed users to see when friends had read their message. After delivering a message, a tiny ‘D’ appears in the top left corner of the message, and when friends read that message, that ‘D’ will change to an ‘R’.

One of the biggest benefits of BBM – particularly for iPhone users who are worried about iOS security flaws – is that other users cannot replicate a BBM address. While users can create fake texts from traditional phone numbers, or replicate their friends on instant messaging services, this can’t be done on BBM because each BBM contact is unique to the Blackberry ID.

BBMforiPhones.net also advertises the fact that the BBM for iPhones app can be used by both businesses and individuals. It’s an easy way to notify all employees of an upcoming event, for example, or to have a group chat without ever being in the same room as coworkers.

Because of all these benefits, iPhone users have been searching in vain for a BBM app for many years. Finally, thanks to BBMforiPhones.net, that app has arrived. At the BBMforiPhones.net website, visitors will be able to learn more about the website’s flagship app, as well as download BBM for iPhone directly.

About BBMforiPhones.net
BBMforiPhones.net has created a BBM app for iPhones that brings all of the benefits of the popular instant messaging service to iOS. The app features a similar interface and the same functionality as the traditional version of BBM. For more information, please visit: http://bbmforiphones.net 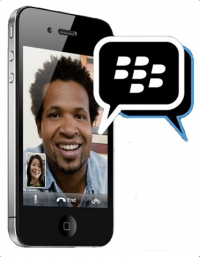