Herriman, UT -- (SBWIRE) -- 04/01/2014 -- A Micro SD Card is a tiny card that can store thousands of photos, songs and other data. However, thousands of fake Micro SD Cards are being sold all over the United States. If you bought a fake card, you may not know it until you try to take just one more picture or add one more song to that card then it can actually hold. Even then you might not notice unless you do the math and add up the file sizes.

Stan Thompson owner of RealSDCards.com was looking to expand his business and wanted to start sell Micro SD Cards. He had several leads on manufacturers that would provide him with cards to sell. As he inquired about getting some samples to test, one of the manufacturer's representative told Mr. Thompson the truth. Mr. Thompson said, “the manufacturer's rep told me that the cards they sold were only 8GB cards, but when they are put in a computer or phone they will say 16 or 32GB. He also told me that a lot of these cards are being sold all over the USA. I then found special software that will test the actual capacity and the speed of the cards. Then I contacted other manufacturers and asked them if their cards were real capacity and that I would be testing them. As I told them that, many of them admitted that their cards were not actual capacity. I even had one representative send me samples and they failed the tests. Some of the fakes were made so poorly they wouldn't hold anything at all”

Manufactures overseas are also not respecting international Trademarks as they will print logos on the cards and packaging that look like the real product, but may turn out to be cheap knock offs.

The software that Mr. Thompson spoke of was created for testing storage devices. This software will write files to your card and then read the files again. It will tell you if the files were stored properly and if their writing and reading speed is correct as well. The software is available for free and Mr. Thompson has a link to it on his website at: http://RealSDCards.com/test

Micro SD Cards are rated by classes. A Class 10 card means that it reads and writes at at least 10 Mega Bytes per second. Fake cards are also being labeled as Class 10, but are actually only Class 4 to 6. It is also important to mention that all memory cards, hard drives, etc. will show about 7% less memory then what it says it is. This is expected and normal. This is partially because of the way memory is measured by different devices and also because formatting the card takes up space. So an actual 16GB card should say that it has about 14-15GB available when you plug it into your computer or phone.

Mr. Thompson bought the domain name RealSDCards.com to use to sell his cards and guarantees his memory cards are the real thing. He also said, "if you buy a cheap micro SD card, then cheap and fake is probably what you are getting. And do you really want to trust your data with a cheap and fake card?" 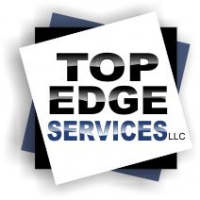 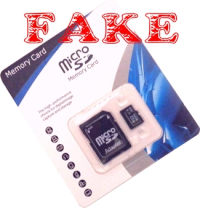 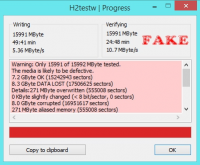 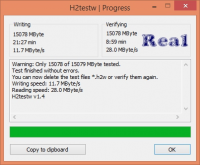