From Dana A. Holyfield, ‘Honey Island Swamp Monster Documentations’ tells the story of Harlan Ford – Holyfield’s grandfather and the first person to report a sighting of the infamous monster to the media.

Slidell, LA -- (SBWIRE) -- 05/06/2014 -- Over four decades ago, Harlan E. Ford was deep in the heart of Louisiana’s Honey Island when he made a discovery that swept through the media with record speed.

It had thick hair covering its entire body and sinister eyes. The horrific, snarling man-beast stood before Harlan and his friend – and then disappeared back into the woods, burning the image of itself into their eyes and minds forever. It wasn’t the only encounter with this creature.

Now, for the first time, the records of Harlan’s sightings – and those of other eyewitnesses – have been compiled into the definitive book on the subject from Harlan’s granddaughter Dana A. Holyfield, entitled ‘Honey Island Swamp Monster Documentations’.

This terrifyingly true story will keep readers up at night as they wonder… where is the monster now? What will it do if it is found?

And when will it appear again?

Official Synopsis:
Harlan Ford was the first person to pour plaster castings of tracks and report a sighting to the media of an unknown creature known worldwide as the legendary Honey Island Swamp Monster. Harlan Ford was my grandfather.

While recently moving everything from the Ford home after it was sold, we came across a letter that Harlan Ford wrote in the 1970’s to the Argosy Magazine about his encounter with the Honey Island Swamp Monster. I’m not sure if the letter was ever published. After Harlan Ford passed away in 1980, his story of the Honey Island Swamp Monster has been told and retold by many people. As we all know when things are retold so many times, certain details change, get exaggerated, maybe by accident, maybe on purpose. Some people try to say his story was a hoax after a local hunter found a track glued on the bottom of a shoe. But luckily Ford’s encounters were documented in his own words in the letter. I inserted Harlan Ford’s actual letter that he typed in this book.

There are also documented sightings from more recent eye-witnesses.

Since its release, the book has attracted a lot of attention from fans and earned a five-star-rating on Amazon.

“Awesomeness. Dana Holyfield is the best person to write about this cryptozoological phenomenon the honey island swamp monster is deeply routed to Louisiana folklore and is a worthwhile book to read. The book is great for any one interested in any Cryptid,” wrote Cole Herrold.

“This book also includes many photos of evidence and of the folks kind enough to share their harrowing tales. My only complaint is that it is too short! I would love to read about more encounters. I hope that Ms. Holyfield will write more books to keep us up to date. She has done a wonderful job of preserving her grandfather’s legacy and I am glad that she is sharing it with us. Well worth your time and a great read if you are a cryptic fan,” wrote AdmiralU.

“It has eye witness accounts of encounters with this creature. I used to live not all that far from this area and had my own encounter. If you want to have your skin crawl, then you should read this,” wrote Gayle Ireland.

For further information about the book and accompanying documentary film, please visit the official website or Facebook page. 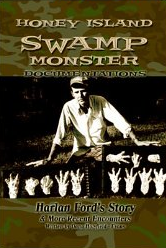