Gibraltar -- (SBWIRE) -- 02/28/2012 -- Bingo Power is a well known and leading online bingo comparison site and it has partnered with Spanish Stray Dogs, an organisation that helps abandoned animals. Both have participated in a Facebook challenge that came about as a means to raise awareness about abandoned animals and much needed funds for the animal shelter. In total 1,000€ were raised in the challenge which lasted less than a week as the campaign gained momentum and gathered overwhelming support from the public.

Bingo Power's owner and director Ivan Hernandez said "The idea came from Andy Baker, who volunteers at an animal shelter in Los Barrios, Spain. He is passionate about caring for animals which have been abandoned and when he asked for our help in raising awareness and money for the shelter we jumped at the chance. The proposal was something that we thought would be mutually beneficial to us both so it made sense to do this. The cause is also something that I feel quite strongly about since I believe that people should do their utmost not to abandon their pets and that they are not a toy that you buy for Christmas, as is often the case. People should be fully aware of the responsibility that having a pet brings before getting one, otherwise the sad reality that is seen in these animal shelters and killing stations will continue."

"The problem has also been exacerbated in Spain by many people having to leave their homes due to the financial crisis and leaving their pets behind. Sometimes dogs are just left outside the shelters and other times abandoned animals are brought in by people who find them. The real problem is that many animals in other shelters are destroyed because of lack of funds but Spanish Stray Dogs vows to never kill any animals and is doing a wonderful job in caring for these animals which have been abandoned or mistreated." Ivan added.

The help to Spanish Stray Dogs came in the form of a Facebook challenge where Bingo Power would donate 1,000 Euros in exchange for 1,000 new likes to their Facebook page. This sounded simple enough but in reality it was a little more difficult to achieve mainly due to the nature of the Bingo Power site which is unrelated to animal welfare. However reservations aside the participants showed unity and initiative and recruited people who believed and supported this cause to share and like the page. The campaign soon went viral, gathered momentum and the challenge was completed in less than a week.

The main aim of Spanish Stray Dogs is to re-home abandoned cats and dogs which find themselves in the Los Barrios animal shelter. In order to do this they have to raise funds to keep the shelter in the hands of volunteers otherwise it would have to be handed back to the council and it will become a killing station again and every Friday all the dogs and cats would be destroyed. Spanish Stray Dogs is very active in social media networks, publicising dogs by all means possible locally and also overseas. Funding allows them to purchase items for the shelter, pay vets bills, and neuter animals. Spanish Stray Dogs also assists in escorting dogs to and from airports, other shelters and foster homes, as well as providing advice for potential owners and carrying out home checks on potential adopters and foster parents.

Ivan Hernandez said about Spanish Stray Dogs, "We are proud to have been able to help and have been amazed at the response from the animal-loving community. We have nothing but praise to the people who care for these animals and keep the hopes of these poor defenceless animals of finding a loving home well and truly alive." Bingo Power will be providing continued support to this organisation and will also find other suitable causes to be involved in because even though the nature of the website is entertainment and online bingo, they believe that it is important to also have a responsible side and to give back to those in the community that need help. 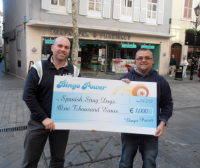