Written by Diana O’Leary, ‘Birthmark’ is the tale of one woman’s incredible experiences. Through heartache, the struggles of a marriage to a man suffering with bipolar disorder, rubbing shoulders with the rich and famous, and living on a tea estate in Ceylon, ‘Birthmark’ is a journey of dazzling beauty and extraordinary courage.

From her birth in Ceylon (now Sri Lanka), to her brief dalliance with Cary Grant and her travels to over forty countries, O’Leary has experienced more in her short time on the planet than most could in a thousand lifetimes.

With ‘Birthmark’, O’Leary’s memoir, the author invites readers to venture along with her and experience what she experienced: traveling to exotic locales, a troubled marriage, her beloved first husband, and her unswerving devotion to her daughter, Tara.

“At first it was difficult for me to put my life on paper,” says O’Leary. “However, the more I prayed, the more I knew that Jesus wanted me to write about the journey He had given me. Not only that, but I also wanted to share my previous life with my daughter – many children grow up never knowing about their parents – about their secrets, their dreams or their desires – it’s all a mystery to them. I wanted my daughter to know my true self.”

Striking, raw and relentlessly intimate, ‘Birthmark’ is a memoir that cuts straight to the heart of what truly matters, and demonstrates that even a working class girl can achieve the life of her dreams.

Synopsis:
In January 1942 while World War II raged through Europe, Diana Vernon Munro was born in the quiet district of Slave Island in Colombo, capital city of the exotic island in the Indian Ocean known at that time as Ceylon. Through laughter and tears you will experience her unconventional upbringing, learn how she discovers her lucky "Birthmark" and becomes the peacemaker between her flamboyant artistic mother and alcoholic father. At twelve years old her life is shattered as she, her mother and two younger sisters leave Ceylon without their father. With two suitcases and very little money they try to make a life in Italy before being summoned by relatives in England where the three girls receive an education.

Working in London as a travel agent during the exciting sixties she meets many influential people, including Cary Grant, with whom she had a brief dalliance. At twenty-four she falls in love with her future husband who is thirty-six years older and who gives her the world. Her vivid and heart-breaking story is captivating more so with the birth of her only child. In her early fifties she marries a man twenty years younger unaware that he suffers from bipolar disorder, and she puts her life on hold to help him.

This unforgettable memoir takes the reader from the tea plantations of Ceylon (now Sri Lanka) to the backdrop of over forty countries around the world as Diana continues to check on her "Birthmark" while experiencing her amazing good fortune and the heartaches along the way. The theme throughout this book is her unwavering faith as she encounters the vicissitudes of life.

Since its release, ‘Birthmark’ has earned a five star rating on Amazon and glowing reviews from readers.

“Diana O'Leary has led a fascinating life from a childhood in Ceylon, to the high life in London and all spots in between. Her life has been the stuff of dreams, but there have been some bad times as well, and she tells it all. A really good read and highly recommended,” wrote Bay House.

Writing, “I didn’t want it to end!” ‘Book Lover from around the world’ said: “This is a MUST read book. I couldn't put it down - the story is so moving, emotional, poignant told with so much love and hurt at the same time. Absolutely lovely writing.”

“This is a true story of the author's memoirs. They make movies from this type of book. Diana's adventures from childhood to the present will take you around the world. It truly is a page turner. A MUST READ! Don't miss this one!” wrote Trisha.

Kathleen McCormick was equally impressed, writing: “An extraordinary tale of an extraordinary lady! I couldn't put it down! Fabulously written with page turning enthusiasm and poise, Diana's life story is a fantasy tale interwoven with life's true up's and downs! This is a great read if you want to step off into another world for a while! I highly recommend it. Would make a great movie!”

For Diana O’Leary, the true gift has been what she’s been able to share with her readers.

“It was important to express my faith in Jesus and to let my readers know that all things are possible through Him; I could never have written ‘Birthmark’ had it not been for His divine inspiration,” says the author.

Continuing: “Dreams do come true and for those who have no chance of travelling the world – I let them travel with me; when I hear from people that they’ve felt as if they have lived vicariously through me – it makes me happy. Above all, I wanted to show what I believe - that miracles can, and do happen.”

About Diana O’Leary
Diana O’Leary lives in a quiet residential area in Fort Lauderdale with her two dogs and remains very close to her daughter, Tara. 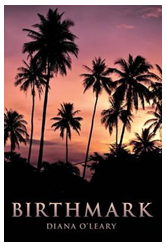