Bitcoin Miner is a new website that aims to answer all questions about the practice of Bitcoin Mining and help people make better returns from their enterprises.

Beverly Hills, CA -- (SBWIRE) -- 03/26/2014 -- Bitcoin is still a controversial idea but the value of the virtual currency has rocketed, it has excited entrepreneurs like few other ideas in the last ten years, and has led to a phenomenon known as Bitcoin Mining. Bitcoin Mining uses processing power to complete large volumes of mathematical tasks that generate Bitcoins, which now have a monetary value. By generating these Bitcoins in large sums, rather than devaluing the currency as a whole, users can sell them off to create cash. This is a complex process however and many get lost trying to understand it, so Bitcoin Miner was launched to explain the process in detail.

Bitcoin Miner (http://bitcoinminer.net/about-us/) uses a FAQ format to address popular questions in an open and easy to read format, with the sub-sections split up so that individuals can easily identify where on the page addresses the topic of their interest and focus their attentions there without being overwhelmed by content.

The content itself is written in easy to read plain English with the focus on simplifying complex concepts so anybody can get involved in the Bitcoin mining phenomenon. The site has rapidly expanded its number of content areas and will be adding content regularly to them including editorial comment.

A spokesperson for BitcoinMiner.net explained, “Bitcoin is still on the fringe of most people’s consciousness, as a sort of experiment or libertarian conspiracy. However, Bitcoin is very real, and is rapidly evolving beyond the setbacks that occur whenever a revolutionary concept is laid open to free market thinking. While there have been abused, the system can also be uses effectively by individuals to make more money by essentially creating Bitcoins and selling them to investors, of which there are many, and our site can show people how.”

About Bitcoin Miner
Bitcoin Miner strives to become the leading source of information for everything related to Bitcoin Mining. Their staff has many years of experience in mining Bitcoins from the early days of GPU Mining to buying the latest KNC and Cointerra Miners. They have determined that the best way to present as much information as possible is to build an FAQ style front-end site with a nice user interface. For more information please visit: http://bitcoinminer.net/ 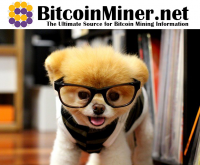