Amin Joseph (The Expendables, Homefront, The Mist, Son’s of Anarchy) has a supporting role in the blockbuster G.I. Joe 2 release March 28, 2013 in North America. The plot follows the Cobra Commander who now has all the world leaders under Cobra's control, with their advanced warheads aimed at innocent populaces around the world. Outnumbered and out gunned, the Joes form a plan with the original G.I. Joe General Joseph Colton to overthrow the Cobra Commander and his allies Zartan, Storm Shadow and Firefly. Amin plays a member of the Cobra Secret Service.

Amin, an emerging black male celebrity has a busy day March 29, 2013. In addition to G.I. Joe: Retaliation, he stars in the new Cinemax series Zane’s “The Jumpoff” executive produced by best selling author Zane. The season premier of the television series and the blockbuster G.I. Joe: Retaliation land on the same day. Amin’s recent credits include Southland, Major Crimes, Best Night Ever, and Starlet. His fans can keep in touch via the twitter handle @Amin_Joseph and Amin Joseph facebook fanpage. 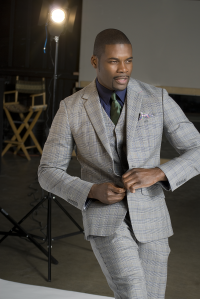