Written by adult amateur Equestrian, Amber Spiler, the ‘Blackwatch Stables Series’ takes young readers deep into the magical relationship between owner and pony. The first book in the series, ‘The Secret of Blackwatch’ is set to launch on December 6th, 2013. The series is inviting all to experience a literary ride laced with love, trust and adventure.

Atlanta, GA -- (SBWIRE) -- 11/21/2013 -- While Tween Fantasy is a booming genre, many narratives succumb to the over-use of wizards, goblins and superheroes. However, a compelling new series by Amber Spiler introduces a creature that is laden with magic yet rarely gets enough attention – the beloved pony.

‘Blackwatch Stables Series’ explores the magical relationship between owner and pony as they as they conquer phenomenal life changing events.

Maggie has always wanted a pony, but with the recent death of her mother those dreams had been put on hold. Her dream comes true when her father surprises her with a trip into the mysterious world of Blackwatch Stables. Lead by the scrupulous Ms. Cavalieri, Maggie learns that owning a pony is a bit different than she imagined.

Guided by the other girls at the barn, she learns that caring for her pony, Bella, is hard but rewarding work. As her adventures at Blackwatch Stable begin, she and Bella quickly develop a magical relationship full of love and trust that carry them through phenomenal life changing events.

As the author explains, releasing the first book in her series is a dream come true.
“I’ve always dreamed of publishing a book that young people will cherish, and the recent accessibility of self-publishing has made this a reality. I hope my readers enjoy absorbing the story as much as I did writing it. There are plenty more volumes in the works – so stay tuned!” says Spiler.

The Secret of Blackwatch will be released on December 6th.

About the Author
Amber Spiler began her equestrian career at age 5 in the horse country of Ocala, Fla. Inspired and supported by her mother, Trish Cavalier, she began working with Mary Rivers where she developed extensive knowledge that covered many breeds and styles of riding. “She was my idol and second mom. She was one of the most important role models in my life.” Amber earned the title of National Champion Equitation rider in the Paso Fino breed as well as four other national championships and several regional and state championships. Life took her away from horses for 20 years.

As life allowed, Amber rekindled her passion while watching her daughters, Bella and Lily, learn to ride and experience the excitement that had consumed her as a young girl. Then she found Toby, her current horse, through CANTER Mid-Atlantic (an organization that places thoroughbreds into good homes when their racing career ends). “Toby helped me find my soul again!” It is with this enthusiasm for horses that Amber decided to pen Blackwatch Stables Series, weaving her own experiences into this delightful story for the tween and adult audience. 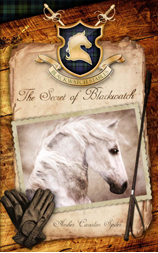