Sarasota, FL -- (SBWIRE) -- 08/01/2012 -- With an influx of vampire books hitting the shelves, along with a hugely popular series of movies, some critics are proposing that the ‘un dead’ may be too popular for their own good. However, authors Barb Jones and Jerry Wright have recently announced the launch of a series that many hail as the ‘fresh blood’ needed for the rebirth of the beloved vampire genre.

The response to ‘Queen’s Destiny’, the first book in the series, ‘Blood Prophecy’, has delighted the duo, who credit their traditionalism as one reason for the overwhelming success.

“Our goal is to bring the traditional vampire tales back into play, with a series of books that will thrill new readers and satisfy those with a taste for something more than the watered-down releases of recent years,” says Barb Jones, noting that, “vampire stories have long been popular and always will be. However, the genre has taken something of a punch during the past few years. We aim to bring them back to their true potential.”

The official synopsis of ‘Queen’s Destiny’ promises a compelling mystery for the readers to sink their teeth into:

“Amber Stone, once a child prodigy, has just become curator of a special collection of Macedonian artefacts for the Seattle Museum of Natural History. Chloe, a prodigy of a different sort, holds a position at the museum focusing on tribal art. The two become fast friends, united by Amber's unsettling dreams and Chloe's unorthodox ways of dealing with them. Two strangers arrive in town, bringing with them a prophecy recorded more than three-thousand years ago, a prophecy that places Amber directly in the midst of a battle that has spanned millennia.”

Since its launch, the book has garnered nothing but rave reviews.

“The first thing I noticed about Blood Prophecy is that it was incredibly in depth. By the time you finish this book you will have a very clear idea about the characters and the story behind them. Blood Prophecy: Queen's Destiny has left itself wide open for a rip roaring series of books and I am looking forward to reading every single one of them,” said one reader, reviewing the book at Amazon.com.

Another, this time reviewing the book for Hampton-Networks.com, was equally as impressed.

“I really enjoyed reading Queen’s Destiny. The interactions between Amber and Chloe and Michael and Marcus are entertaining. This is an interesting story and I cannot wait to see where the story goes from here,” they wrote.

Blood Prophecy One: Queen’s Destiny, published by AuthorHouse Publishing, is available now from both Amazon.com and BarnesandNoble.com.

More information can be found on the book’s official website: http://www.thebloodprophecy.com and at its Facebook fan page.

About the Authors
While already a published poet, Barb Jones makes her prose debut with the Blood Prophecy series. Jones lives in Sarasota, Florida with her two children; where she enjoys a successful career in IT Management as well as regularly speaking in public on the subject of Quality Assurance. Jones has recently announced a new series of books, Little Arthur and Merlin the Magnificent, aimed at pre-schoolers.

Jerry Wright is the author of Creepy Pasta for the Soulless, a collection of flash horror fiction, and his short stories have appeared in numerous journals and anthologies, most recently in the new zombie anthology Unquiet Earth from Static Movement Press. He lives in California with his wife and seven children. 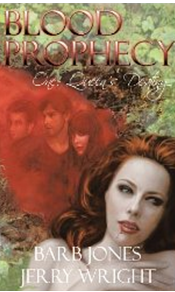