Through a compelling and heart-warming story based around a Doberman and her puppies, author Richard Estrada Corey has one goal – to instil compassion and good character into today’s young generation.

‘Bloodline The Doberman Family’ is so much more than a work of fiction; it’s a clear attempt to inspire young people to live a life that cares for humans and animals.

Wrapped up in a gripping plot, the book tells the story of Lilly, a mother Doberman who wants to save her puppies from a life of hate and fear. Wanting them to grow up showing love and care for others, she uses her experience as a security dog to impart good character. However when Lilly and her puppies suffer a number of ordeals during the adventure of a lifetime, will what they learn allow them to find the paradise they desire?

“The book uses a number of interactions and scenarios to display how Lilly and her puppies attempt to make positive choices to affect their future,” says Corey, who is self-confessed animal lover and promoter of good character.

He continues, “Nobody can tell a story better than animals. That’s why I’ve worked diligently to create a pack of loveable dogs that will make young people sit up and listen.”

“It was an excellent story and an easy read. It was enjoyed by my whole family. As it was an easy read, it made it simple for all members of various ages to enjoy,” says Michelle, who reviewed the book on Amazon.

Another reader, L.D. Anderson was equally impressed. They said that, “This is an endearing story about a Doberman family. If you like books like that you might enjoy this outing. There also nice illustrations to go with the story.”

In fact, in an effort for the book to impact society as positively as possible, Corey has recently announced that 10% of all book sales will be donated to an Arizona-based charity that helps abused animals.

“If we can raise money to help animals while educating a nation on what it takes to be a good person, I’ll see it as mission accomplished,” Corey concludes.

‘Bloodline The Doberman Family’, published by CreateSpace, is available for purchase through Amazon.com.

About Richard Estrada
Richard Estrada Corey is an Arizona-based senior with a passion for young people and animals. While trying to achieve his dream of becoming a popular author, Corey is working hard to educate children about the importance of care and compassion around their fellow humans and to the animal world.

Corey is currently writing his fifth book in the Bloodline series of books. 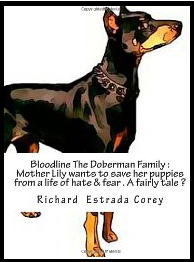