San Fransisco, CA -- (SBWIRE) -- 10/12/2012 -- China’s human rights record often comes into question, particular in relation to their dealings with the Falun Gong religious movement. There are many reports of persecution of Falun Gong practitioners in China, but they are not well documented.

One book that has recently brought this issue into the limelight is “BLOODY HARVEST” by prominent Canadian human rights lawyer David Matas and former Canadian Secretary of State for the Asia-Pacific region David Kilgour. This must read book has gained significant international attention for the conclusion it makes about Chinese persecution of Falun Gong on a horrifying, industrial scale. The authors were nominated for the 2010 Nobel Peace Prize on the strength of the contents of the report that the book is based on.

The central argument of the book is the chilling allegation that the Chinese Communist government runs a secret program whereby FALSELY imprisoned Falun Gong practitioners, have their organs harvested while they are alive and sold to foreigners at huge prices even though these practitioners only follow the principle of Truthfulness-Compassion-Forbearance.

The book contains the large body of evidence that Matas and Kilgour based their conclusions upon, with 33 separate reports detailing the illegal organ harvest program. It also contains interviews with witnesses and key Chinese dissidents who testify as to the veracity of the claims.

In addition to the evidence, the book also contains details about the reactions to the original report that the book is based on, and the steps that have been taken to end the alleged organ harvest program.

A commentator said: “The horrifying governmental abuse of Falun Gong practitioners in China is well documented, but before the Kilgour-Matas report was written the industrial scale of the atrocity was not widely known. This book describes China’s systematic organ harvesting program, and exposes how Falun Gong practitioners are targeted for this unspeakable and ghoulish breach of human rights. Sadly, despite the best efforts of many individuals and organizations and the usual denials from the Chinese government, our best guess is that this program continues. The only way we can stop it is to increase public awareness, and the dissemination of the information contained in this startling book is the most effective way.”

About Bloody Harvest
“Bloody Harvest” was written by David Matas and David Kilgour, and is based on the Kilgour-Matas report into allegations of human organ harvesting from imprisoned practitioners of the Falun Gong spiritual movement. 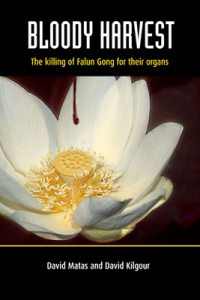