Las Vegas, NV -- (SBWIRE) -- 01/13/2014 -- The sacred traditions of blues, folk and southern rock enjoy a fresh perspective under the guide of the Neil Roston trio, as Roston wails both vocally and instrumentally in a way that only a true blues musician knows how. The group is comprised of three excellent musicians who contribute their talents to the success of Roston’s sound. Neil Roston, a self-taught musician with a rich and vibrant musical history, fronts the group on guitar and lead vocals. Lynn Victoria handles bass and backup vocals, and Brett Williams keeps a steady rhythm on drums.

As a songwriter, Roston is inspired by more than just his musical influences. His tone and lyrics have been shaped by such life experiences as the death of his mother and the love and loss of new and past relationships. Some of his songs also chronicle 1950s Mississippi and the Emmett Till story—Till was a 14-year-old African American boy who was murdered in Mississippi after allegedly flirting with a white woman. Roston envelops himself in these stories and brings them to life with poignant and impassioned lyrics.

Neil Roston’s proudest musical accomplishment thus far is his performance with drummer Brett Williams in “The Duo,” which is Saskatchewan’s biggest musical competition, akin to American and Canadian Idol competitions. In the spring of 2012, Roston and Williams went up against 25 other duos in elimination rounds that lasted five weeks, where duos were voted on by a panel of judges and a live audience. At the end, the best groups performed at the Grand Finale, including Roston and Williams, who took third place. To top it off, the duo was the only group to perform an original song at the Finale.

In the short term, Neil Roston plans to record and release their single for the song, “Lovin’ Man,” and finish composing new material for albums in the future. “Lovin’ Man,” which you can hear on their ReverbNation page, has all the classic qualities of a true blues rock song, from the traditional walking rhythm of the guitar and bass to raw, rugged vocals that tell of love and desire plus a couple of guitar solos that really cut loose.

Tracks like “See It Through” scale everything back a notch and take a softer approach to the blues, as Roston passes on the slick guitar solo in lieu of Lynn Victoria’s striking, harmonizing vocals. “Emmett Till” strikes a balance between the rock-fueled blues and the slower side of “See It Through,” but it’s really the vocals and the story behind them that carry this song along.

The story is gripping and grim, but Roston’s voice and guitar solo find a way to beautifully sing the senseless story of a young boy’s death. The traditions of blues and rock are strung through each of the group’s songs, making them a perfect listening companion for anyone looking for the latest versions of the bluesy classics.

Catch the Neil Roston trio live to get a good grasp of these artists’ take on blues and folk rock at their upcoming show January 30th, 2014 at Crackers in Saskatoon. To access some of their recorded songs, visit their ReverbNation page, and check out their Twitter and Facebook pages for band updates. 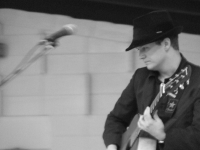