Bluetooth Wristband Aims to Be Best in Class

Technology company PCRange has launched a $90,000 crowdfunding campaign to develop a wearable Bluetooth device that keeps you in touch with your phone when you’re not using it.

Lonsdale, Australia -- (SBWIRE) -- 12/18/2013 -- Designed to cure FOMO (Fear Of Missing Out), the Telltale Scoop is a Bluetooth-enabled, lightweight wristband that uses subtle vibrations and LED indicators to notify the wearer of activity on their phone when it’s out of sight. Customized settings alert the user to what type of notification was received and from whom.

Planned for a June 2014 release, the Telltale Scoop works with Android and Apple iPhones using a Bluetooth chip with a range as far as 10 meters.

PCRange CEO Raaj Menon said he came up with the Telltale Scoop concept because he was missing so many phone calls and messages. “I thought it would be nice to have a device that vibrates silently, so whether I’m in a meeting, the shower or just watching TV, I can set vibration patterns so I know who’s calling without even looking at the phone,” he said.

About PCRange
PCRange is a successful technology distributor that markets Billion broadband routers in Australia, as well as popular mobile accessories brands PADACS and DROIDAX globally.

“To make this a commercial reality, we want crowdfunding to finance the tooling and mechanics, develop the smartphone apps for Android and iOS as well as various social media applications plus manufacture the Scoop with high quality materials to deliver the best product possible.”

PCRange has used the Indiegogo crowdfunding platform to launch a 45-day campaign to raise $90,000 to finance the development and commercialisation of the Telltale Scoop. 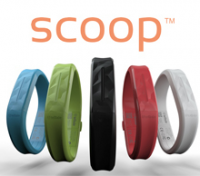