Intended as a charitable form of peaceful protest, a new website allows Americans to send President Obama a message that it’s time to move on, while their purchase will provide a contribution to feed to at least six staving children a meal.

Dallas, TX -- (SBWIRE) -- 09/10/2012 -- With November’s election looming, many are telling Obama that it’s time to go. Some choose to trash landmarks, shout propaganda in the streets, occupy Wall Street and public parks across the country. However, one new online movement, http://www.moveon-out.com is taking their message directly to the White House, in the form of parody moving boxes, which provide for a contribution to the Kids Against Hunger Program.

MoveOn-Out.com, founded by a conservative voter who is committed to trying to make a difference, is providing an outlet for peaceful protest that helps feed children along the way. Those visiting their website can purchase a box that is mailed directly to President Obama, with the message that it's time for him to move out.

“People concerned about their freedom, the economy, taxes, bailouts, immigration, corruption, etc. can vent a little, have a little fun and also help fund meals to starving children through donations to the Kids Against Hunger Program,” says Kyle Gibson, who recently started themoveon-out.com and the bootoutbarack.com websites.

He continues, “Each box ordered will be sent directly to the White House by first class mail. The boxes are shipped as empty as the Obama Presidency. In addition, each box purchased will provide a donation to the Kids Against Hunger program, which will feed six starving kids a nourishing meal.”

Intended to be both a parody and a protest, the boxes serve as a gentle prompt that it’s time for Obama to go.

“We don’t like his policies, lack of leadership, traveling the globe and trashing America and feeding tax dollars to his cronies and unions. We are not protesting in the streets, trashing private property, occupying city and state parks or rioting. We’ll protest peacefully and help others as we do so,” Gibson adds. Again, it will show what people can do without the help of Government. “It’s definitely time for Mitt Romney and Paul Ryan to start rebuilding America and working to undo the damage caused by the failed Obama policies”.

In fact, if the group reaches their goal of sending at least 1,000 boxes from each state, (fifty thousand boxes to the White House), over three hundred thousand meals will be provided to starving children.

To find out more, visit the site and send a box today, please visit: http://www.moveon-out.com

About MoveOn-Out.com
MoveOn-Out.com gives Americans an opportunity to voice their opposition to Obama’s continued Presidency, while providing meals to children in need. 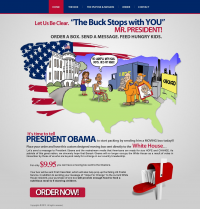