Tracy Falbe revealed the top and bottom levels of the holy war depicted in her epic fantasy New Religion in an excerpt at her blog. The characters of the High Priestess and the boy soldier illustrated the dark themes from the novel. Interested readers can also get a coupon code to save 15 percent on the paperback.

An excerpt from New Religion now at her blog Her Ladyship’s Quest revealed a dark episode from the novel when a boy soldier is enticed to kill for rewards. Along with the look inside the book, Falbe included coupon code EHJ77M8M to save 15 percent on the paperback at Createspace.

“I had long pondered the exploitation of children in warfare and decided to create a teenage soldier in New Religion to explore how young people can be manipulated into killers,” Falbe said.

She named the character Khage and the fantasy novel opens with him and other boys being rounded up from their village and marched to a training camp in a remote forest. This is being done to swell the army of a powerfully magic rys sorceress named Onja who set herself up as a Goddess in the previous novel. With a bigger army Onja plans to expand her religious system meant to build her wealth and military power.

Khage suffers many depredations and ultimately must kill or be killed during his training. He is also indoctrinated into Onja’s religion and told that he must kill unbelievers.

In the excerpt published on January 21st at Falbe’s blog Khage is about to assault a major city. His violent passions are ignited by the High Priestess as well as by older warriors who are the handlers of the boys.

“People probably won’t like Khage as shown in this excerpt but I hope I showed the dark forces driving normal morality out of his life,” Falbe said.

“Throughout the novel I tried to foster some reader sympathy for Khage. He does some horrible things, but he’s young and he’s forced into this life and told it’s holy. What would you do?” Falbe said.

Khage was added to the series in the third book to illustrate the progress of Onja’s holy war through a character who was not its architect. “He’s a pawn. He’s a victim too,” the author added.

New Religion is part of the Rys Rising series that readers have praised for its sweeping scope, plot twists and turns, and a narrative design meant to let readers experience both sides of an epic conflict. The 6 x 9 inch trade paperback is 446 pages with ISBN 978-0976223597. 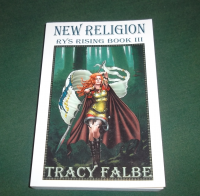 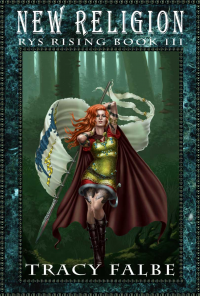