Seoul, Korea -- (SBWIRE) -- 01/22/2013 -- According to online game analytics company Superdata Research, mobile gaming will represent a $7.5 billion worldwide market by 2015. Because dozens of new smartphone games are becoming available daily, it can be a challenge to pick which game to conquer next.

Since 2003, popular game developer and publisher Pictosoft has been devoted to creating some of the top gaming applications for smartphones. Pictosoft’s creativity and technology have made them one of the top game application makers in the business. The company is best known for their many bestselling games such as ‘8th Floor: Secret of Cast,’ ‘Devil War,’ and ‘Caribbean Zombie,’ all available on the Apple App Store.

Recently, Pictosoft announced its plans to release a brand new social game, City of Crime. The game will be available for download from the Apple App Store on January 22, 2013. Pictosoft’s City of Crime comes complete with high quality graphics and sound effects.

In City of Crime, gamers are invited to explore the dark criminal empire in a quest to become its ultimate ruler. Players can join diverse gangster groups from all over the world—such as the Russian Mafia, Japanese Yakuza, or Korean Crime Organization—and build their own crime organizations. As players extend their rule over gangs from all around the world, they can hide out in any country and city of their choice.

City of Crime allows players to interact with each other through thrilling and fierce real-time battles. The goal of each battle is to defeat rivals and capture their buildings. Battles increase and decrease each user’s attack and defense power, but users can also hire hit men. Players are invited to ally with their friends in order to create bigger gangster organizations.

About Pictosoft
Pictosoft was established in 2003 to develop and publish mobile games for mobile platforms. Pictosoft’s goal is to provide detailed and accurate game-like entertainment. The company strives to create the best games on the market, built with the highest creativity and technology. For more information, please visit http://game.pictosoft.com 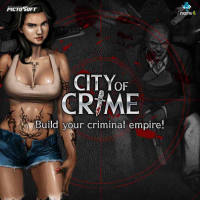