Matawan, NJ -- (SBWIRE) -- 05/09/2014 -- When it comes to programming and technological skills, US students have been steadily falling behind the rest of the world’s youth for many years.

The epidemic problem has captured the attention of tech titans, entrepreneurs, and politicians.

Computer programmer and entrepreneur Raj Sidhu is taking on Cantwell’s challenge by creating a board game designed to teach children how to code.

The board game (called “Code Monkey Island) is designed for ages 8 and above, and has already raised over 60% of it’s $15,000 funding goal on crowdfunding platform “Kickstarter”.

In Code Monkey Island, players must get all of their monkeys safely across the “island” by using real programming concepts like conditional statements, loops, Boolean logic and operators, assignment and mathematical operations, and even data structures.

“I started working on Code Monkey Island for one reason: learning how to program changed my life, and it’s changing the world around us, too,” says Raj Sidhu, Code Monkey Island’s Creator. “I wanted to take concepts that stumped me in college and present them in a way that anyone of any age could understand.”

Sidhu’s goal is to help more Americans to secure these tech jobs that will otherwise go to people outside the U.S. “If you grow up with an intuitive understanding of programming, it becomes second nature and vastly easier to secure high paying jobs” explains Sidhu

With Code Monkey Island, Sidhu hopes to help kids stay ahead of the curve, both in the classroom and out.

Code Monkey Games, LLC, was founded by designer and developer Raj Sidhu in April 2014. The company's first game, Code Monkey Island, teaches children ages 8 and up how to apply real programming concepts used by real programmers. Sidhu can be contacted at raj@codemonkeyplanet.com or by phone at 714-606-2560. 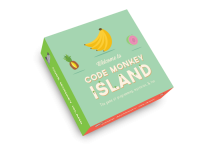