Milton Keynes, UK -- (SBWIRE) -- 11/05/2012 -- British crime/thriller fiction author Sandra Prior is scheduled to release her new book “Dangerous” on the 5th of November. Set to be available in paperback and on the Kindle, “Dangerous” is Prior’s first crime/thriller fiction book. In the book, Prior invites readers to take a trip back in time to the East End’s underworld and into the lives of the Taylor family.

Compared to books by famed author Martina Cole, “Dangerous” is centered on the fictional life of Bobby Taylor, a king pin who has amassed enough gang ties to fill the Royal Opera House. The story begins on November 5, 1971 when the notorious gangster’s sordid past catches up with him and leaves him dead. This sudden twist sets Bobby’s son, Mickey, on a mission to find out how is father was killed, to settle old scores and to avenge his father’s death.

Like his father, Mickey is no stranger to the seedy gang-related underworld. In fact, he idolized his father’s scandalous lifestyle and sought to emulate him at every turn, earning him the nickname “Dangerous.”

The book follows Mickey as he uncovers the gritty details of his father’s past and is forced to confront the damage his father inflicted on his mother, brothers and sisters, a truth they never dared to tell him before. Most importantly, Mickey has to consider the possibility that one of his family members may have played a role in his father’s death.

Mickey’s obsession with power, hatred and revenge will take readers down a winding path of suspense, excitement, thrill and heart and will show them just how “Dangerous” he truly is.

Like many people who dream of one day writing and releasing a book, Sandra Prior’s demanding career and busy family life forced her to put her writing aspirations on the back burner for years. But one day she attended a seminar by Life Coach Anthony Robbins, where she built up enough courage to walk across a 15-foot bed of burning coals. After that accomplishment, Prior decided she was going to fulfill her dreams and “keep walking.”

According to Prior, “I am so thrilled and excited to finally be releasing my first book, ‘Dangerous.’ The Taylor family has a special place in my heart and once other people get to know them, I am sure they will find their way into the hearts of readers everywhere.”

In the future, Prior plans to devote an entire series to the Taylor family.

“Dangerous” will be released on the 5th of November and is available for pre-order right now via Amazon.co.uk.

For more information or to pre-order “Dangerous,” visit http://www.sandraprior.co.uk

About Sandra Prior
Sandra Prior is a British crime/thriller fiction writer. Her first book “Dangerous” is due for release on the 5th of November. Prior has aspirations to continue writing and future plans to devote an entire series to the Taylor family, featured in “Dangerous.” 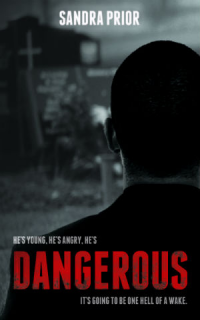