New York, NY -- (SBWIRE) -- 12/12/2013 -- When Sutton Foster (2-time Tony Winner for “Thoroughly Modern Millie” and “Anything Goes” and star of TV’s “Bunheads”), Patti LuPone (2-time Tony Winner for “Evita” and “Gypsy” and star of TV’s “American Horror Story”) and Megan Mullally (2-time Emmy-winning star of TV’s “Will & Grace” and star of Broadway’s “Young Frankenstein” and “Grease”) each agreed to do rare, new 90 minute concert / interview / comedy specials - to be aired exclusively online - they did so at the request of one special man. Each of the leading ladies had also recently performed equally rare, intimate, sold-out concerts with him for the acclaimed “Broadway @ The Art House” series in Provincetown, MA over the past year. Series host and pianist Seth Rudetsky, the multi-hyphenate Sirius/XM Radio Star-musician-comedian-author whom the New York Times dubbed “The Mayor of Broadway,” convinced each of the superstars to present these special performances as filmed concerts exclusively through SethTV, his own, new web-television network. All three concerts are now available to purchase on the site, with Foster’s having just launched over this Thanksgiving weekend.

What perhaps differentiates these TV specials from others is the seamless mix of intimate behind-the-scenes stories from three of TV and Broadway’s brightest stars – prompted by the encyclopedic-minded Rudetsky’s probing, funny, revealing questions – and their stellar singing of unique repertoire. If there are stories from Sutton Foster, Patti LuPone and Megan Mullally’s TV, film & Broadway careers that you’ve always wanted to hear them tell, and songs that you’ve always wanted to hear them sing...chances are, that you’ll see and hear them here (and possibly only here) on SethTV’s “An Evening With…” series of concert specials. Coming soon in the web series are reportedly concert specials from Audra McDonald, Christine Ebersole, and Chita Rivera, among others yet to be announced.

Sutton Foster starred on Broadway in “The Will Rogers Follies,” “Grease,” “The Scarlet Pimpernel,” “Annie,” amd “Les Misérables” before her big break and Tony Award-winning performance in “Thoroughly Modern Millie.” She has since then originated roles in the Broadway productions of “Little Women,” “The Drowsy Chaperone,” “Young Frankenstein,” and “Shrek the Musical.” She most recently starred as Reno Sweeney in The Roundabout's revival of “Anything Goes,” a role that earned her the 2011 Tony, Drama Desk, Outer Critics, Astaire, and Broadway.com's Audience Favorite Awards. She was first seen on television on “Star Search” at age 15, and has appeared in “Johnny and the Sprites” and “Flight of the Conchords.” Most recently, she was the star of the ABC Family TV ballet ‘dramedy’ “Bunheads,” created by “Gilmore Girls” writer/producer Amy Sherman-Palladino. It was announced this week she will star in the pilot new TV series “Younger” by “Sex and the City” creator Darren Starr, and will also take the lead in a new Broadway revival of the musical “Violet” for the Roundabout Theater Company. On December 8 she appeared at the 36th Annual Kennedy Center Honors, where she performed a medley of hit Broadway songs made famous by honoree Shirley MacLaine, including “Something Better Than This,” “Steam Heat” and “She’s No Longer A Gypsy.” The star-studded event will be broadcast on CBS as a two-hour primetime special Dec. 29 at 9 PM ET.

Patti LuPone won her second Tony Award for Best Actress in a Musical, as well Drama Desk and Outer Critics Circle Awards, for her performance as Rose in the most recent Broadway production of “Gypsy,” and created the title role in “Evita” on Broadway with her now legendary performance, for which she won her first Tony and Drama Desk Awards. Patti LuPone’s extensive Broadway career also includes her recent appearance opposite her Evita co-star in “An Evening with Patti LuPone and Mandy Patinkin,” and just prior to that created the role of Lucia in the new musical “Women on the Verge of a Nervous Breakdown,” for which she was nominated for Tony, Drama Desk and Outer Critics Circle Awards. She has also been seen on Broadway in “Sweeney Todd,” Michael Frayn’s “Noises Off,” David Mamet’s “The Old Neighborhood,” Terrence McNally’s “Master Class,” and her own concert “Patti LuPone on Broadway.” On London’s West End, she won Olivier Awards for her performances as Fantine in the original production of “Les Misérables” and for her role in the Acting Company production of “The Cradle Will Rock.” Also in London she created the role of Norma Desmond in “Sunset Boulevard” and recreated her Broadway performance as Maria Callas in “Master Class” there. Patti LuPone’s film appearances include “Union Square,” “Parker,” “City By The Sea,” “Heist,” “State and Main,” “Summer of Sam,” “Driving Miss Daisy,” and “Witness.” Her TV work includes “Glee,” “30 Rock,” “Ugly Betty,” “Will & Grace,” “OZ,” “Frasier,” “Law & Order,” “Life Goes On,” the Emmy winning PBS broadcasts of “Passion” and “Sweeney Todd,” PBS Great Performances’ “Candide” and “An Evening with Patti LuPone.” Patti currently stars on FX TV in “Glee” creator Ryan Murphy’s “American Horror Story: Coven.”

Megan Mullally is best known for playing the iconic role of Karen Walker on "Will & Grace" for which she won two Emmy Awards, three Screen Actors Guild Awards, and four consecutive Golden Globe Award nominations. She made her Broadway debut as Marty in the 1994 revival of "Grease" with Rosie O'Donnell and next appeared as Rosemary in the hit 1995 revival of "How to Succeed..." opposite Matthew Broderick. In 2007, she starred as Elizabeth in Mel Brooks' original Broadway musical, "Young Frankenstein." She appears on all three cast albums. Megan has also been seen on TV’s "Seinfeld," "Frasier," "Wings," "Ned and Stacey," "Mad About You," "Caroline in the City," "Just Shoot Me!," and "Murder, She Wrote." She hosted her own talk show titled "The Megan Mullally Show," and has hosted "Saturday Night Live," and guest-hosted "The Late Show with David Letterman." Most recently she’s been seen on "30 Rock," "Kathy Griffin: My Life on The D-List," "Campus Ladies," "Parks and Recreation," "Party Down," "Children’s Hospital," "Happy Endings," and "Breaking In." Her film work includes "Anywhere But Here" with Susan Sarandon and Natalie Portman, "About Last Night" with Demi Moore and Rob Lowe, "Speaking of Sex" with James Spader, "Stealing Harvard" with Tom Green and Jason Lee, and the 2009 remake of "Fame."

Seth Rudetsky is the afternoon Broadway host on Sirius XM satellite radio. As a musician, he has played piano for over a dozen Broadway shows including “Ragtime,” “Les Miserables,” and “Phantom of the Opera.” He was also the Artistic Producer and Music Director for the first five annual Actors Fund Fall Concerts, which included “Dreamgirls” with Audra McDonald (recorded on Nonesuch Records) and “Hair” with Jennifer Hudson (recorded on Ghostlight Records, Grammy nomination). As a comic he was awarded “Funniest Gay Male in NY” at Stand-Up NY and is a three-time Emmy nominee as a writer for “The Rosie O’Donnell Show.” As an actor, he made his Broadway debut in “The Ritz” directed by Joe Mantello, and has appeared on television on “Law and Order C.I.” and “All My Children.” As an author, he wrote the books The Q Guide to Broadway, Broadway Nights, and just released his new novel My Awesome/Awful Popularity Plan on Random House, and as an audio book on audible.com featuring “Modern Family’s” Jesse Tyler Ferguson, “SNL’s” Ana Gasteyer, “Smash’s” Megan Hilty among others, and writes a weekly column on Playbill.com. He recently added "television mogul" to that long list as SethTV, his new, web-based entertainment network, launched. This past summer he co-produced of the critically acclaimed play "Unbroken Circle" by James Wesley, and is co-playwright and star of the hit new Off-Broadway ‘disaster movie musical’ “D isaster!” running now at St. Luke’s Theatre in New York.

An Evening with Sutton Foster
featuring Seth Rudetsky as pianist and host
on www.SethTV.com
Filmed live July 4 & 5, 2013 at The Art House theater in Provincetown, MA

An Evening with Patti LuPone
featuring Seth Rudetsky as pianist and host
on www.SethTV.com
Filmed live July 4 & 5, 2012 at The Art House theater in Provincetown, MA

An Evening with Megan Mullally
featuring Seth Rudetsky as pianist and host
on www.SethTV.com
Filmed live August 23 & 24, 2012 at The Art House theater in Provincetown, MA

About SethTV
Broadway favorite Seth Rudetsky has taken another entertainment leap. The SiriusXM radio host, novelist, Broadway actor/pianist, Playbill columnist, Grammy nominee, award-winning comic, and Emmy-nominated writer recently added "television mogul" to that long list with the launch of www.SethTV.com, his new, web-based entertainment network. Go behind-the-scenes of the Broadway ringmaster's a-MAH-zing life with original shows, celebrity concerts and more. You never know what the stars will say or do...or sing on Seth TV. Plus, a portion of each subscription will benefit Broadway Cares/Equity Fights Aids and The Actors Fund. Whether behind the piano or the microphone, he’s the man at the center of all things Broadway, with the most enviable 'Rolodex' in the industry. Entertainment Weekly named Seth TV to its “Must List” immediately upon launch in July. Metrosource Magazine described it this way in its Oct/Nov 2012 ‘Best of the Web’ issue: “Seth Rudetsky is honestly one of the funniest people we’ve ever had the pleasure of meeting, and if you like theater (and laughing), you’re definitely going to want to go see Rudetsky do his thing at sethtv.com.“ 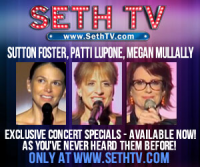