Cupertino, CA -- (SBWIRE) -- 05/13/2013 -- TeribalAnamal is a recently formed group of artists whose music is heavily steeped in the Indies genre and post punk genre. In the world of music and entertainment, new talent is waiting to be found in each corner of the earth. The right moment and opportunity seized can mean a career boost and a dream come true for many. Such is the case of newbies Ryan who is on vocals and bass, Chalky playing the drums, shrills and whistles and Stephanie playing the guitar who also supports with the vocals. The three came together after many let downs and disappointed endeavors to form the group in 2012, now known as TeribalAnamal.

Based in the city of Brooklyn, New York, the post-punk rock trio have recently launched their debut album recorded in Satland Studios. With upbeat music and influences from the likes of Siouxsie and The Banshees, The Cure, My Bloody Valentine, Joy Division, New Order, The Wipers, The Kills, P.J. Harvey, We Were Promised Jetpacks, Cyndi Lauper, Nirvana, and many more, the trio has big hopes and dreams from the year 2013, having just launched their debut album EP.

Regular gigs and concerts are being performed by the band in collaboration with small and big bands with the similar genre of music to offer. The songs on the Anamala album include the following six tracks:

The album is available at major digital music retailers and music discovery services such as Amazon MP3, Rhapsody, Spotify, Last.fm etc. The band has received many great reviews from listeners and concert goers who have posted via social media comments and appreciation for the great paced tracks and a taste of fresh indie music. With their songs being played almost 3000 times in the first week of release, Teribalanamal is sure to hit it big time in a couple of months. They are definitely worth bringing to the front and center stage.

Having performed gigs at the Trash Bar, Lit Lounge, The Delancy, Fontana’s Bar and Grand Victory in Brooklyn, the post punk rock trio are all set to make waves with their genre of music and to attract more people towards Indie Rock.

Their 6-song debut EP Anamala is now available on CDbaby.com and iTunes. Check it out at the following links:

The band is available for bookings, press, and interviews via teribalanamal@gmail.com

Keep up to date with the band at: 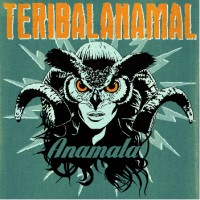