Greenbrae, CA -- (SBWIRE) -- 02/28/2013 -- Business networking was not a familiar term in 1993, but thanks to bestselling author Susan RoAne, it has become part of the lexicon of American enterprise. The book, “The Secrets of Savvy Networking: How to Make the Best Connections for Business and Personal Success,” and its author are celebrating two decades impacting how business people succeed.

Books are called "evergreen" when messages apply over time, RoAne points out. Not many books are still relevant after two decades, she says, but her book on savvy networking, one of the first ever written on the subject, is. Why? “Technology has (radically) impacted the ways in which we communicate, relate and connect, but people have not changed! We still are shy, uncomfortable, want to be memorable, have a support system, and enjoy a successful career. But all too often, we are unaware of those unwritten rules of networking and mentoring that can either catapult our careers or collapse them,” she says in an article on her website.

After 20 years, the book still is available at Amazon, print-on-demand, and as an audio book on CDs from MacMillan Audio. It is also in many FedEx/Kinkos nationwide.

Initially, RoAne wasn’t eager to write a book about networking when asked to do so, but she soon realized how much she had to share with readers. As a sought-after professional keynote speaker, the Mingling Maven® (as she is known) gives diverse audiences the required tools, techniques and strategies they need to connect and communicate in the global business environment. She has been a bestselling author for 20 years.

RoAne’s practical, informative and interactive presentations are filled with what “The San Francisco Chronicle” calls her “dynamite sense of humor.” Audiences learn How to Work a Room® (which happens to be the title of another of her bestsellers) and master the art of face-to-face communication in any setting. With her timeless tips, anyone can overcome shyness and learn to schmooze with confidence in business networking or social gatherings.

Susan RoAne is considered one of the nation’s most influential networking and business communication experts. She has sold more than a million books worldwide, and helped launch an industry that she continues to recreate and shape today

About Susan RoAne
Susan RoAne is celebrating 20 years as a bestselling author. Her book, “The Secrets of Savvy Networking: How to Make the Best Connections for Business and Personal Success,” was originally published in 1993. The author holds a master’s degree from San Francisco State University and a bachelor's from the University of Illinois Champaign-Urbana, where she was honored at an “Authors Come Home” event. For more information, please visit www.susanroane.com/articles/savvy_secrets_net_anniversary.html. 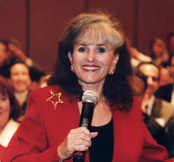