In partnership with Qwest Press and Baker & Taylor, award-winning filmmaker Kanithea Powell is delighted to announce the launch of her bold new coffee table book. Showcasing dramatic and spectacular styling, ‘Butch’ celebrates all that is false about stereotypical norms

Washington, DC -- (SBWIRE) -- 10/09/2013 -- While blending in is considered the norm, Kanithea Powell has never succumbed to life’s monotonous moulds. As an award-winning filmmaker, thinking ‘normally’ would have constrained the talent that has made Powell’s name synonymous with creative success. However, Powell’s latest release is a far cry from the world of video.

Well, these aren't your typical flannel, mullet, boot-wearing butches. This new ART BOOK pushes the "BUTCH" definition beyond its seams.

Packed with fashion forward pictures that are vivid, dramatic and provocative. These gender- bending bois will make your heart skip a beat. It is a feast for the eyes and the coffee table.

You will fall in love and never again judge a butch by her cover.

“Kanithea’s lavishly illustrated tribute to butch women showcases dramatic and spectacular styling layered with passages that speak to the heart of any (wo)man on the journey to find her true inner beauty,” says Kay Small, Powell’s PR Agent.

Continuing, “loaded with breath-taking photographs, this art book celebrates the incredible creations of an imaginative and inspirational artist whose work and ideas push the stereotypical norms.”

“Firstly, the Cover! If that does not make you want to buy this book, you have no soul. For me this book serves up a tasty helping of: high fashion, flawless natural beauty and a strong sense of self. It left me feeling proud to be a woman, uniquely made and divinely inspired. This is a must have!” says one reader, reviewing the book on Amazon.

Another commented, “WOW that is all I can say about this book...I have never seen anything more beautiful...Kanithea captures butch women in such a way that it challenges you to alter your thoughts on what butch means...it pushes the meaning of butch so far its ugh I love it! Breathtakingly beautiful images and deep amazing quotes...I have slept with this book for the last 3 days”

With the book’s demand expected to increase, interested readers are urged to purchase their copies as soon as possible.

‘Butch’, published by Qwest Press, is available now: http://bit.ly/15X1taZ and at Amazon.com

About the Author: Kanithea Powell
Kanithea Powell is the Artistic Director and Founder of Qwest Films, LLC. Powell started her career as one of the founding members of the Orlando Black Theatre. The first African American theatre company in Orlando, Florida.

There Powell directed, produced, and performed in several plays before moving to Atlanta and starting her career as a television producer for a local station. In Atlanta she formed Qwest Films, there she began writing, directing and producing films. After a stint in the new mecca Powell moved to Washington, DC to work with the prestigious Duke Ellington School of the Arts. There she worked closely with the students of the Literary and Drama department. 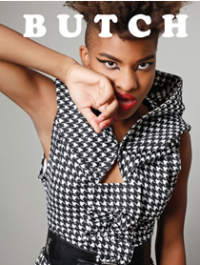