Around this time things were happening for the future star. Winfrey became an honors student, was voted Most Popular Girl, and joined her high school speech team at East Nashville High School, placing second in the nation in dramatic interpretation. She won an oratory contest, which secured her a full scholarship to Tennessee State University, a historically black institution, where she studied communication. Her first job as a teenager was working at a local grocery store. At age 17, Winfrey won the Miss Black Tennessee beauty pageant She also attracted the attention of the local black radio station, WVOL, which hired her to do the news part-time. She worked there during her senior year of high school, and again while in her first two years of college.

The Miss Black America pageant was created by J. Morris Anderson in 1967 after speaking with his two young daughters who desired to become Miss America, although the contest at the time didn’t allow Black women to join the competition.

With help from Phillip Savage, then director of the Tri-State NAACP, Anderson was able to get nationwide press coverage for his event. Anderson held it in Atlantic City on the same night as the Miss America event; he would meet angry protests and invasive inquiries from Black newspapers.

Saundra Williams of Philadelphia won the inaugural pageant. A tall, slender and Afro-wearing beauty, Ms. Williams stood as a proud example for young African-American women. Anderson would eventually negotiate with television network NBC to run the MBA live on air.

Support from both those in Hollywood and the music world has been strong. Stevie Wonder, the aforementioned Ms. Winfrey, Spike Lee, Congresswoman Maxine Waters and countless others have appeared on the MBA stage as part of the lavish affair.

Brian Douglas is a photo collector who has spent over 20 years finding and collecting rare photos. He considers this one of his best finds ever. 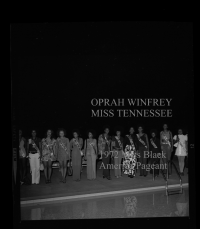