Having worked with cancer patients for almost a decade, T.R. Aletheia has been exposed to the profit-preserving tactics of dozens of U.S pharmaceutical companies. In the belief that there are life-saving alternative therapies that the health system will never endorse, Aletheia shares her research in a compelling new book.

Virginia Beach, VA -- (SBWIRE) -- 11/20/2012 -- With more than 1500 people losing their battles to cancer each day, one U.S health professional remains iron-clad in her belief that pharmaceutical companies are the catalyst to the problem. In fact, T.R. Aletheia is so concerned about the priority given to profit-generating drugs that she has written a book, ‘Cancer: An American Con$piracy’, to expose the corruption.

“Where can you turn when your own country is profiting from your suffering?

Every day thousands of people in the United States are given the terrifying news that some form of cancer is lurking within their bodies. Stricken and vulnerable, the patients must rely on the advice given by the conventional medical community. But if conventional medicine isn't winning the battle, why not look elsewhere?

The truth, as explained in Cancer: An American Con$piracy, is that there are many alternative treatments that exist, many of which offer promising cancer survival rates. Unfortunately, these treatments may never be offered as viable options for any cancer patients within the United States. Why not? Because these alternative treatments are being kept secret by today's profit-focused medical establishment.

After all, healing patients doesn't make anyone any money, but prolonging a patient's prohibitively expensive - yet ineffective - care does.

As the author explains, it was time the truth became public.

“I was inspired to write this book because I got tired of watching my patients die. I also found it to be a way to channel my anger about all the natural therapies that are being hidden, in a healthier manner,” says Aletheia.

She continues, “The American public is being deceived and every time I see someone throw their money away on pink ribbon campaigns, I see red. My goal is to educate the public about the truth.”

While critics praise Aletheia for her exposé, she makes clear that her main goal is to drive change rather than revenge.

"The purpose of this book is not to condemn, but rather to shed light upon the truth and set the stage to effect change in our country. The time for change is now,” she adds.

With half a million Americans due to fall victim to cancer within the next year, Aletheia’s compelling book could easily become an historic vehicle for this change. With this in mind, she is working tirelessly to get as many people as possible to sit up, listen to her arguments and demand an overhaul of the current cancer treatment system.

“America is a country that has a history of achieving anything it puts its mind to. One in three of us will be diagnosed with cancer at some point in our lives, so it is our responsibility to ensure that we are prepared for proper care. The current system fails this target miserably. However, we can demand change and I’m confident we’ll get there,” she concludes.

About the Author: T.R. Aletheia
T.R. Aletheia, MS, RD, CNSC is a registered dietician with a passion for holistic healing. She earned her master's degree in holistic nutrition from the Clayton College of Natural Health. Having one foot in each camp, so-to-speak, she likes to combine her knowledge of conventional nutrition with her love for holistic methods. Her interest in alternative therapies was born after the death of her father from cancer. She has studied and worked with the Edgar Cayce readings for more than twenty years and is a member of the Association for Research and Enlightenment. She currently lives and works in Virginia. 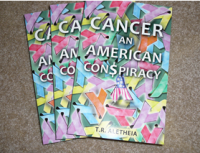