Daytona Beach, FL -- (SBWIRE) -- 02/10/2012 -- The U.S. Air Force is hosting the popular new recording star, Candy Coburn, at their display booth at the Daytona 500 this year. Candy will be available on February 25 and February 26 to sign autographs and entertain visitors with original music, including her new hit single on radio now, “Don’t Walk Away.”

Candy Coburn is an American country artist best known for her hit single, “Pink Warrior”, which was inspired by her grandmother’s battle with breast cancer. Released in 2009, the song has been used as an anthem by Susan G. Komen for the Cure and is a favorite among people who are passionate about the fight against cancer. One hundred percent of the profits from sales of the single have gone to Susan G. Komen for the Cure to help in that fight.

With tour schedules averaging 160 dates per year on stages across the country, Coburn has performed in front of more than 40,000 people at the Susan G. Komen Global Race for the Cure on the National Mall in Washington, D.C. She has also performed at NASCAR for close to 45,000 at Charlotte Motor Speedway, and 110,000 at Churchill Downs.

Scheduled for a special performance event during the Country Radio Seminar hosted in Nashville just days before the Daytona 500, Candy shared her excitement that the timing worked out for her appearance for the Air Force.

“I am so honored to be invited to appear and perform at the Air Force Booth for the Daytona races. I am always excited to be a part of any event to support our amazing service men and women. It’s the best of both worlds to be able to do this at a speedway event as I have always been a huge fan!”

Candy has formed strong partnerships that have played an important role in her success as an artist. In addition to her Pink Warrior work with Komen and other cancer groups, Budweiser has been a proud sponsor of Coburn for the past five years and looks forward to continuing the relationship.

“Candy Coburn is an American classic and a perfect fit for Budweiser,” said Darryl Edwards, Marketing Director of the Mid-Atlantic Region of Anheuser-Busch. ”She’s an amazing artist that brings passion and energy to the stage every night, but the work she does performing for charities and at U.S. military events makes her truly special, and we look forward to working with her for years to come.”

Last year, Texas Roadhouse also formed a partnership with Coburn. Corporate spokesman Travis Doster says, “Candy is not only a great person, but she is also an awesome performer and a great brand ambassador for Texas Roadhouse. She truly embodies our core values of Passion, Partnership, Integrity and Fun.”

Candy will be at the Air Force display booth on the mornings of Saturday, February 25 and Sunday, February 26. The booth will be located in the Midway area outside of turn 4. 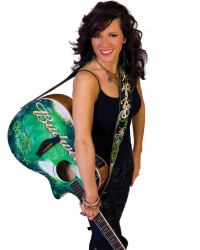