As he faces the last days of his life, the prim and proper Lord Dingleberry of Mounting Abbey sits back to tell the tale of his lustful exploits as a young navy man. There have been rumors for years among upper crust gossips about what really happened during the war.

Tonight, he’s going to spill his guts about what can go down in Papua New Guinea after dark. There, the hearts of darkness are served bloody rare and the nubile lovelies come ripe as red papaya. Cannibal Cuties is a coming-of-age jungle trip into the sexy savage land. Love and adventure are on the menu. And if he’s not careful, his arse will be too!

Noir hopes that this latest novel will defy any single genre and attract a far-reaching audience.

About Bo Noir
Bo Noir is the American Author of Night Walking, the first book written in English and Doge. He lives in Philadelphia with his family. 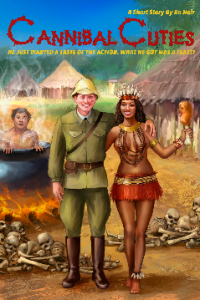