The site has posted the results of the Best Drivers Report for 2011 on its home page to illustrate why geographic locations have such a power effect on car insurance rates. The site has published the top- and bottom-ten ranking cities as well as a link to the full results.

Seattle, WA -- (SBWIRE) -- 09/29/2011 -- CarInsuranceRates.com, a no-cost provider of quotes on car insurance policies, now has on its home page a summary of The 2011 Best Drivers Report. Performed every year by Allstate Insurance, the list ranks 200 cities according to the average number of years drivers have between accidents as well as the relative likelihood of an accident to occur.

For the second year in a row, drivers in Fort Collins, CO were the safest in the country, with an average of 14 years between accidents and had a 30 percent lower chance of having an accident than the national average. Boise, ID; Lincoln, NB; Chandler, AZ; and Huntsville, AL also ranked in the top five, respectively.

“Often our visitors don’t fully grasp why geographic location is so intimately linked to auto insurance rates. This list helps illustrate the point. Drivers in the highest-ranking cities will pay substantially lower premiums than drivers from cities at the bottom of the list, simply because insurance actuaries have found that they are far less likely to have to pay out claims in these ‘safer’ cities,” said Nathan Ackerman, spokesman for CIRS.

At the bottom of the list were cities like Washington, DC; Baltimore, MD; Glendale, CA; Newark, NJ; and Providence, RI. These cities also consistently rank at the top for highest car insurance rates.

“While we publish this list every year to illustrate the link between location, accident risk, and auto insurance rates, we also want our visitors to be aware if they live in a city where an accident is statistically much more likely than most other places in the country. Perhaps the ranking will encourage drivers in the less safe cities to slow down and drive defensively,” said Mr. Ackerman. 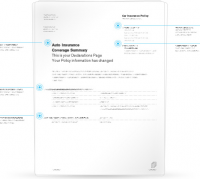