Smart Crowdfunding slated to carry out strategic marketing initiatives for CardioAutomatic, the system that conducts full ECG/EKG tests in five minutes with the use of a smartphone app.

Alpharetta, GA -- (SBWIRE) -- 08/27/2013 -- With a $98,000 goal the creators of the CardioAutomatic, a system that gives a full ECG/EKG reading in five minutes with the use of a smartphone app, have launched a crowdfunding project on Indiegogo. A simple device that makes a complex analysis of the heart even simpler, the CardioAutomatic allows users to determine what the creators call a “personal Heart Vitality Index” for use in conversation during their next doctor’s visit. “With the device, there are three indicators, or options, to show users the basic condition of their heart. These indicators work with a ten digit scale on the app that gives them a better sense of how their heart is doing.” said Michael Beinenson, CEO of CardioAutomatic.

With the ability to take heart readings on a daily basis and historically track the progress, the system measures how the body reacts to stress and barometric pressure for either one user or their entire family. By using either reusable clamps for the wrists, electrodes on the hands, or electrodes on the chest users of the CardioAutomatic system can measure their Heart Vitality Index in five minutes on an iPhone 5, 4S or 4. In need of no external power the system simply works with the use of a headphone jack. One need only to apply either the clamps or the electrodes to the body and open the app and ask for a measurement. Making the technology even more convenient, a user’s pulse can be measured either through the provided electrodes and clamps or can be quickly measured using the iPhone camera lens. Placement of one’s finger over the lens will take an accurate measurement.

“Ultimately, this system is meant to help with early diagnosis and maintenance in correlation with a doctor’s care.” added Beinenson. “Heart disease is the number one reason for death in America and studies show that it’s due in part to a lack of early diagnosis. Unfortunately, there is a majority of people who don’t know the condition of their cardiovascular system until it’s too late. We can help that with the convenience of the CardioAutomatic.”

Crowdfunding perks include everything from ongoing updates to the full version of the CardioAutomatic app to the entire system complete with an inventor’s certificate, one thousand electrodes, and the original prototype included. Further perks include the Early Bird Units and Clamps for an investment of $99, and the Unit with Electrodes for $139 among other substantial perks for crowdfunders.

Funds for the project raised on Indiegogo will be used for the securing of equipment for the manufacturing process, FDA certification, a quality assurance audit and manufacturing costs. With ongoing testing for well over a year the company has produced a functioning prototype and an iOS app however, before shipment can be made creators of the CardioAutomatic need to obtain a Class II device certification from the FDA which is now near completion.

About CardioAutomatic,inc
The creators of the CardioAutomatic are based in Atlanta, Georgia and consist of CEO, Michael Beinenson, and Chief Inventor Anatoly Loginov. The CardioAutomatic will retail for $189 and shipment of the product is slated for mid-April of this year. On tap for the very near future is an app for Android and Windows Phone for distribution worldwide. 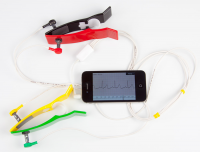 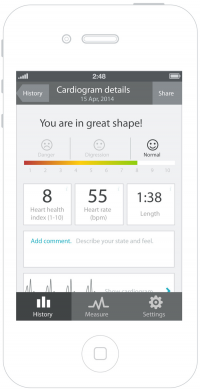