Catering to Social Causes on a Political Platform

How many of political leaders does one see mingling with laymen and helping alleviate their causes? Not many, at least not in India.

Andrapradesh, India -- (SBWIRE) -- 02/11/2013 -- How many of political leaders does one see mingling with laymen and helping alleviate their causes? Not many, at least not in India. Having a political background has come by birth to Sri Ravi Kumar Yadav. His father, Sri Maraboina Bhikshapati Yadav is a very well known personality in the Serilingampally Assembly Constituency of Andhra Pradesh. In addition being well known, he is also greatly respected for his life-time work of serving people across the constituency and people of the state when opportunity arose.

Sri Ravi Kumar Yadav has been born into the same culture and values and in walking his father’s foot steps; he has done more for people at a very young age. His political career began a few years back and today he is the General Secretary of the Andhra Pradesh youth Congress – a position of strength and influence.

Despite climbing the political ladder overcoming hardships, people and social causes have been his centre of activity. Sri Yadav was seen leading a Padyatra that started from E-Seva, Video colony in Miyapur. Not only did he walk with the people, Sri Yadav also addressed the common man’s problems. This exercise not only served as an ideal way to understand and address social causes in the area, it also helped people realize the importance of social administration from a political stage.

On the same note, Sri Ravi Kumar Yadav also attended the Medical Camp at Anjaih Nagar, Gachibowli accompanied by his father and mentor Sri Maraboina Bhikshapati Yadav. This attendance also served people to make the most of stating their problems to the administration in addition to the administration realizing the medical needs of people. Sri Ravi Kumar Yadav also addressed the people at the camp and assured that more medical camps will be conducted for the needy in the near future.

The passion of social service runs in the Yadav family and the political backdrop is only a way to administer the much needed services to the people. Such far sighted political leaders are far and few in between and until such time that Sri Ravi Kumar Yadav is at the helm, people of his constituency and state can expect a great deal of social upliftment. 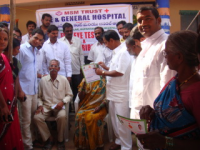 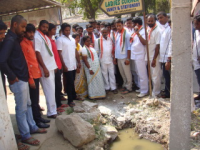