During the symposium Turkish officials heard from leading experts from the U.S., Saudi Arabia, New Zealand, Turkey and Greece, including Dr. Devra Davis, award-winning scientist and founder of the Environmental Health Trust.

Teton Village, WY -- (SBWIRE) -- 07/01/2013 -- Prominent health researchers documented serious health threats from cell phone radiation during the Medicine and Biology Electromagnetic Field Symposium at the Ondokuz May?s University in Samsun, Turkey, June 17. In response to the conference, officials in the Samsum Province have spearheaded a public campaign to educate locals, particularly pregnant women and young men, about the safer use of cell phones.

During the symposium Turkish officials heard from leading experts from the U.S., Saudi Arabia, New Zealand, Turkey and Greece, including Dr. Devra Davis, award-winning scientist and founder of the Environmental Health Trust (EHT). She discussed how microwave radiation from cell phones and other cellular devices affects the cell walls of sperm, eyes, liver, and the brain. "Cell phone radiation impacts membranes of every living cell in our bodies," Davis noted. "It's critical to promote reduced exposure through simple and easy habits, remembering that distance is your friend."

Davis also presented evidence based on her current paper, co-penned by renowned public health experts, Santosh Kesari, MD, PhD, Chief of Neuro-oncology at the University of California San Diego, and Anthony B. Miller, MD, Professor Emeritus of Public Health at the University of Toronto. The paper, which may be found here, notes that cell and cordless phone radiation significantly increased risks for brain cancer, tumors of the acoustic nerve, salivary gland cancers in the cheek, and leukemia. The highest incidence of cancers, according to the paper, are found on the side of the body where the cell or cordless phone was used, bolstering the evidence that cell and cordless phone radiation is a probable carcinogen. Miller added, "The grounds for taking steps to protect the brain from cell phone radiation are stronger now than before."

Dr. Suleyman Kaplan, head of the Department of Histology and Embryology, Faculty of Medicine and founding president of the Turkish Society for Stereology, cautioned the public about these findings. Kaplan warned that cell phones should not be used in the car or the elevator, “Because the device emits more radiation during the time it seeks to contact the nearest cell phone tower,” he explained. “Certainly mobile phones should be kept away from young children,” Kaplan added. “The mobile phone is not a toy.”

Calling for distribution of literature on cell phone safety to more than 20,000 students is Professor Hüseyin Akan, the Rector for Ondokuz Mayis University. Local mayors have also vowed to distribute EHT educational materials to their constituents, including young men and pregnant women, in their local districts and health clinics.

About environmental Health Trust
Environmental Health Trust is a nonprofit 501c(3) organization educating individuals, health professionals and communities about controllable environmental health risks and policy changes needed to reduce those risks. Capitalizing on growing public interest in Dr. Devra Lee Davis’s popular books – When Smoke Ran Like Water, a National Book Award Finalist, The Secret History of the War on Cancer, and Disconnect: The Truth About Cell Phone Radiation, What the Industry Is Doing to Hide It, and How to Protect Your Family, the Nautilus silver medal award 2013 for courageous reporting, and recent documentary films – the foundation’s website is an authority on science-based information to prevent environmentally based disease and promote health. To support EHT’s work, visit http://www.ehtrust.org and find EHT on Facebook. 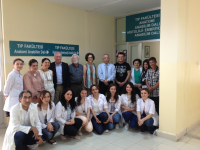 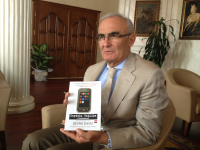 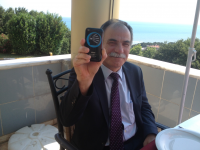 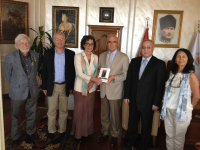