Georgetown, TX -- (SBWIRE) -- 11/08/2012 -- Intermission has just gotten a little more interesting! As part of a new ongoing monthly series, acclaimed Central Texas attorney John C. Prezas will conduct interviews during one Texas Stars’ game a month. Hockey fans will be excited to learn that their favorite defenseman will be at the center of attention on the Jumbotron as the player goes one on one with Prezas.

The “Defenseman of the Month” is sponsored by the Wilco Law Firm and is the brainchild of hockey enthusiast and lawyer John C. Prezas. Known as the “Defenseman of Law,” Prezas is uniquely qualified to interview players about what it takes to work as a great defensive player. Prezas knows from his time in the courtroom that preparation is the key to any strong defense. Click on the links for more information on juvenile defense.

The Law Office of John C. Prezas is a Central Texas-based general criminal law firm that is known for defending adult and juvenile residents of Williamson and Travis County against a variety of criminal charges. Click on the links for information for Williamson County dwi juvenile lawyer.

In addition to catching this interview during the game, fans can also hear it on the live webcast of the game available via the Stars website and over various NHL websites. A YouTube video of Prezas’ first interview with team captain Max Fortunus can be found at: www.youtube.com/watch?v=YkYdk_zEMwM.

Along with DWI and drug charges, Prezas now includes drug possession and parole issues in his own “defenseman” work. He also represents clients who are facing probation violations, as well as other misdemeanor and felony crimes. Customers can visit his website at www.wilcocriminallawyer.com/juvenile-defense to learn more.

About The Law Office of John C. Prezas
John C. Prezas is a former Williamson County prosecutor who handled misdemeanor and felony cases in both district and county courts for adults and juveniles. He understands how prosecutors put together cases and evaluate evidence. He’s a graduate of Harvard Law and a member of the Texas State Bar College, with in-depth knowledge of Texas criminal law and procedure. He has even helped other lawyers conduct their trials or appeals. John C. Prezas has handled thousands of misdemeanor and felony cases, and has tried jury cases ranging low level misdemeanors to felony cases where defendants faced life in prison. Contact him at jprezas@wilcocriminallawyer.com or (512) 686-0105. 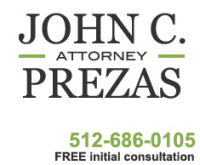