Champion Oil, a recognized leader in racing lubricants, congratulates Chad Kemenah and the Champion Racing Oil / Liz Matus Racing Team who scored their first win of the 2020 Season at Fremont Speedway at the Sandusky County Fairgrounds in Fremont, Ohio. Kemenah passed Caleb Griffith with three laps to go and held on for the win.

Clinton, MO -- (SBWIRE) -- 07/10/2020 -- "It feels great to be back here in victory lane we had a really good car and it got faster and faster as the race progressed," said Kemenah. "I want to thank John Garvin and Liz Matus for allowing us to come out here and race, we have been pretty good the past couple of weeks but AJ Havens had this car on point tonight and it feels good to win one for John and Liz." https://www.facebook.com/chad.kemenah

Starting in the eighth position for the feature Kemenah immediately went to work as he moved up to the seventh position on lap five. Kemenah has raced enough at Fremont during his career and he had to be patient and let the track come to him and that's what started to happen just shy of the half-way point of the feature.

At the half-way point of the race Kemenah was running in the fourth position but the white No.15K was glued to the bottom of the track and he was quickly gaining on the top three cars. On Lap-17 Kemenah drove under Cale Conley for the third position and he was quickly gaining on second place running Cap Henry. Kemenah stalked Henry for two laps and on Lap-20 the pass was made and Kemenah took over the second position.

Caleb Griffith was out in front setting a good pace but he had no idea Kemenah was gaining on him lap after lap. Kemenah was really moving on the bottom and was able to catch and Griffith in traffic and pass him but Griffith quickly adjusted and passed Kemenah back for the lead. Griffith was unable to get away from Kemenah and on Lap-27 Kemenah took the lead but a caution would come out handing the lead back to Griffith and that would set up a three-lap dash for the win.

On the ensuing restart Kemenah got the jump he was looking for and took the lead on Lap-28 and he immediately pulled away from the field in clean air. Kemenah would pick up his first win of the 2020 season.

"Early in the race I felt like we had a good car to get to the top five and maybe with some breaks we could mix it up for the lead," said Kemenah. "I knew I had to patient I could see a few of the drivers ahead of me and I knew they were not running the bottom like we were. In traffic I actually was able to run the middle as well and that really helped us and it actually allowed me to run down Caleb Griffith. I didn't want to see that last caution but I knew he would go to the bottom so I went to the middle and it worked out and here we are."

"Racing in 2020 has been different with all the Covid-19 restrictions and what tracks can race and have fans at," said Kemenah. "We just got our engine back from Paul Kistler and I can't thank him enough for getting our engine back to us so quick. I wish Champion Racing Oil was here to celebrate with us but it's an honor to be sponsored by them. They are great people that love sprint car racing. I also want to thank all of our team and supporters that help make this team possible and this win is for them and for our fans that have stuck with us over the years." 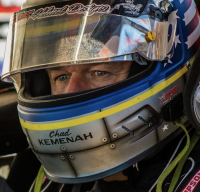