Hafertepe looked like he would have to settle for a minor award on the podium, running third with five laps remaining after jumping the cushion in turn two, nearly hitting the wall. But Hafertepe didn't give up and it paid off with a dramatic drive to the finish.

The four-time ASCS national series champion worked past Mark Smith for second and then wiped out what had been a 1.3-second deficit and closed in on Hagar going into turn three on lap 38. Hagar pushed high, into the cushion, and Hafertepe capitalized with the winning pass.

Hafertepe went on to beat Hagar by an even one second with Smith finishing third.

"It was really exciting. There ain't no better race than that," Hafertepe said. "These three guys that finished 1-2-3, they drove their hearts out. I think all three of us should have won the race. It was a badass race." 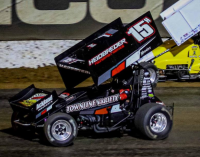