Champion Oil, a global leader in racing and performance lubricants, announced this week that it would for a second year in a row support the Steve King Foundation at the Knoxville Nationals with nightly 2 Seat Sprint Car Charity Rides. Champion will also auction a celebrity driven ride on Saturday, August 11th at 12:30 PM at the Sprint Car Hall of Fame in Knoxville, IA with proceeds going to the Steve King Foundation and the Sprint Car Hall of Fame.

Clinton, MO -- (SBWIRE) -- 08/03/2012 -- The Steve King Foundation is a non-profit, tax deductible, charitable organization established for the purpose of helping the dirt track racing community. The foundation was established after the death of Steve King. Steve died from a brain injury sustained during an accident between turns three and four during Wednesday night race qualifying for the 2006 Knoxville Nationals. http://www.stevekingfoundation.org

From 1961 through 1977, the race was unsanctioned, meaning that it was 'open competition'. From 1978 through 2005, the race was sanctioned by the World of Outlaws. Because of the split in the sport, the Nationals are again unsanctioned and have run with track rules since 2006. Drivers such as Tony Stewart, Jeff Gordon, Kenny Schrader, Ryan Newman, Kasey Kahne, A.J. Foyt, and many other famous drivers have raced on the famous half-mile. 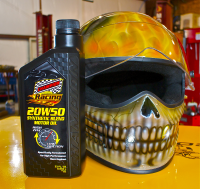