Champion Racing Oil Supports "The Granddaddy of Them All"

Champion Oil, a global leader in racing and performance lubricants, announced this week that it will attend the upcoming 52nd Annual Knoxville Nationals, often called by many, "The Granddaddy of Them All." The Knoxville Nationals is an annual sprint car event held at Knoxville Raceway in Knoxville, Iowa. This year’s event is held August 8th thru the 11th.

From 1961 through 1977, the race was unsanctioned, meaning that it was 'open competition'. From 1978 through 2005, the race was sanctioned by the World of Outlaws. Because of the split in the sport, the Nationals are again unsanctioned and have run with track rules since 2006. Drivers such as Tony Stewart, Jeff Gordon, Kenny Schrader, Ryan Newman, Kasey Kahne, A.J. Foyt, and many other famous drivers have raced on the famous half-mile. 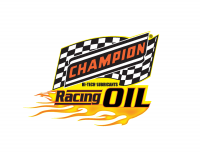