Written by Kevin Rohan, ‘Change Management in the Real World’ is the world’s first business book written exclusively for tablet technology. Fusing authoritative information with fully-interactive video and pop-up graphics, the book is expected to help workers and organizations around the world dramatically slash their project failure rates.

Reno, NV -- (SBWIRE) -- 09/18/2013 -- While billions of dollars each year is invested into research surrounding Project and Change Management, 70% of Change Projects still fail before achieving their primary goal. Amounting to over one million workers going to work each day to work on projects that will eventually fail, the workforce is crying out for a Change Management reality check.

Fuelled by his passion improve projects by reducing waste, incorporating proven Change Management techniques and making the most of new technologies – Kevin Rohan is delighted to announce the launch of his revolutionary new eBook.

Exclusive to iBooks, ‘Change Management in the Real World’ calls on the author’s quarter-of-a-century working at the heart of award-winning projects involving people. However, it isn’t just a book; Rohan’s compelling creation is a fully-interactive digital experience that employs text, video and graphics to afford true change within the workplace.

In most projects, Change Management is the key to success – because it enrolls the people who are key to making the project successful. But the critical importance of Change Management remains largely ignored or misunderstood.

Kevin Rohan shows you how to achieve project success by using Change Management tools and techniques – whose effectiveness has been proven time and again in the real world, all over the world.

As the author explains, a radical new approach to Change Management is required.

"In order to change people's thinking about an old subject, you need to come at the problem in a new way," says Rohan, founder and CEO of Real World Change Management.

Continuing, “I've been thinking about why these projects continue to fail for a long time - and it only took me a few minutes to decide to come at the solution in a new way. So, I wrote the iBook, Change Management in the Real World using the newest technology to cut through the clutter.”

Rohan is confident that interactive reading is the business world’s biggest new asset.

“Many business books need to not only explain their points, but illustrate them within context. This is near impossible through a traditional paper-bound book, so new tablet technology is welcomed as a godsend to organizations around the world. I need to get my information directly in front of people – hence the reason I’ve created the first book designed exclusively for this new technology,” he adds.

The resource can be viewed by any device running iOS 5.1 or later. With the book expected to see increasing demand, interested readers are urged to purchase their copies as soon as possible.

‘Change Management in the Real World’ is available now: http://bit.ly/18rYCMT.

About Kevin Rohan
Kevin Rohan, founder and CEO of Real World Change Management, has been a thought leader in change management, project management and human performance improvement for more than 25 years. He has taught change management and project management since 1991, the last seven at International Human Resources Development Corporation. He has managed change projects totaling hundreds of millions of dollars for numerous Fortune 500 global market leaders, producing revenue gains or cost savings in the tens of millions of dollars.

Kevin was previously a senior manager in the Human Performance Consulting Practice at Accenture, where he taught management development courses in the U.S. and overseas. Before that, he managed the operations systems group at CKE Restaurants, conducting impact studies on more than 150 projects prior to implementation. He has served on the Project Management Curriculum Selection Committee at University of California Irvine, and is a member of the Project Management Institute and a founding member of the Association of Change Management Professionals. 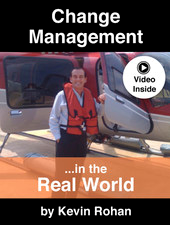