About Chef Lidia Matticchio Bastianich
Starting from humble beginnings in a post World War II refugee camp Chef Bastianich now heads an empire with best-selling cookbooks, restaurants in three cities and nationally syndicated cooking shows on public television. In addition she has developed her own line of tomato-based sauces sold nationally, produces wine at the Bastianich Winery and runs a travel company that offers culinary excursions to Italy.

A noted food historian, Chef Bastianich also gives lectures on Italian cuisine throughout the United States and Italy. Chef Bastianich is often referred to as the “Queen of Italian-American cooking” and the “First Lady of Italian Cuisine.” In a career highlight, she cooked for Pope Benedict XVI during his travels to New York in 2007.

Her signature line: “Tutti a tavola a mangiare!” means “Everybody to the table to eat!” Bastianich's goal was to honor and exalt the food of her ancestors. Well done! 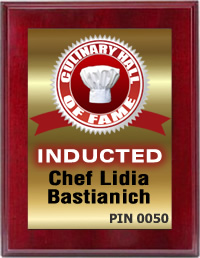