New York, NY -- (SBWIRE) -- 03/09/2017 -- New York City-based Cherrystone Auctions, an internationally-recognized leader in the sale of philatelic material, has successfully concluded its first public auction of 2017. The auction was conducted on the Tuesday and Wednesday of February 28th and March 1st, in four distinct sessions scheduled evenly over the two day auction.

The auction's catalogue, which listed and described all the lots of stamps and memorabilia related to stamps and postal history available for purchase, was published by Cherrystone to its website well in advance of the auction. Interested parties were able to submit bids in advance within a window of pre-auction bidding that concluded shortly before the live auction took place. Bidders were also able to participate in the live auction remotely via the auction house's CherrystoneLIVE online bidding feature. More than 1,500 lots, some lots containing individual stamps and some lots containing collections of stamps and other items, were auctioned off during the two-day auction.

Relatively soon after the auction's conclusion on March 1st, Cherrystone published a list of prices realized at the event. The prices realized for the rare stamps ranged in dollar amounts from around one hundred dollars to a few lots that realized tens of thousands of dollars. Two lots realized the highest price at the recent public auction, with the bidding on both lots culminating in final prices of $45,000 each.

Further details can be found at https://www.cherrystoneauctions.com/_auction/results.asp?auction=&country=RUSSIA++Air+Post

The other lot that sold for $45,000 had a catalogue value of $90,000, and consisted of a single Russian Air Post stamp issued in 1935. Contributing to the stamp's rarity was an inverted surcharge number; only 50 of the stamps were ever printed with the error.

Cherrystone Auctions brings over $30 million in stamps and postal history to market on an annual basis. They hold public auctions every six to eight weeks, and their next auction of 2017 is scheduled to be held in May of 2017. The upcoming deadline to submit materials for inclusion in their next auction is on March 10. 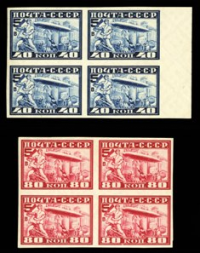