Chicago, IL -- (SBWIRE) -- 08/07/2012 -- Public art pieces have been regarded as an enriching influence on society since ancient times. Publically displayed pieces by artists such as Robert Indiana and Henry Moore have become iconic symbols of the areas they are situated in. Displaying art in public places represents an essential democratization of art, taking it out of stuffy and elitist galleries and putting it in full view of the masses.

This is why it is particularly apt that proposed public art pieces by Chicago based artist MendyZ deal with themes of Chicago equality. MendyZ is seeking funding for this series of vast outdoor canvasses on Kickstarter, a popular “crowd funding” website where entrepreneurs and other funding seekers appeal to the public to part fund their projects and endeavors.

MendyZ’s first piece will be an 8ft high representation of Lady Liberty, the American anthropomorphic symbol of freedom and equality, most famously represented in New York’s Statue of Liberty. In the MendyZ painting, Lady Liberty is reclining, draped in an American flag, in homage to “The Bedroom at Arles” by Van Gogh. MendyZ intends to display this large-scale painting in a public place in Chicago.

MendyZ intends to continue the series in a similar vein, representing themes of equality through quintessentially American iconography. Future paintings in the series are to be displayed in a public equality art show in other metropolitan areas or towns across America.

The artist is attempting to gather the funds required to create this series of paintings through Kickstarter, with various rewards being given to incentivize backers. These range from a small 4.5 inch by 5.5 inch original painting or seriograph for a $5 pledge, all the way up to ten 3 ft by 6ft original paintings given to backers who pledge $5500 or more.

The most striking thing about these rewards are that absolutely all of them are pieces of original artwork, which is fairly unusual for a Kickstarter project.

MendyZ himself said: “A huge public art project like this is about bringing art to the people, and making sure that as many people as possible can enjoy it. That’s why I felt like Kickstarter was the perfect way to fund such a project. I’m giving people the opportunity to fund my project in exchange for a piece of original art of their own, and I felt that it was in the spirit of equality, the theme of the project, that even the lowest pledge levels, all the way down to $5, will get to receive a piece of art.”

About the website
MendyZ is an artist using a Kickstarter project to fund a series of large-scale canvasses on the theme of equality to be displayed across America. 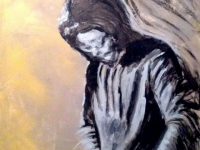